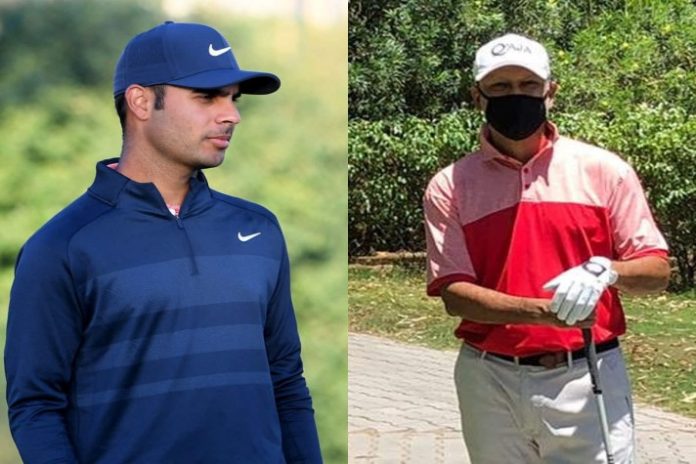 Keeping the government guidelines in mind and their clubs in hand, India’s top golfers returned to practice at courses across the country after weeks of inactivity brought about by the COVID-19 pandemic.

The golfers were without their caddies, though.

Kapur and Ghei have both won at the DGC, have been friends for more than 20 years and have practically learnt all their golf at the famed course, situated at the heart of the national capital.

Both were masked up. There was no backslapping, no handshakes, just an ‘Air Fives’ to acknowledge each other’s good shot. No usual snacks and coffee or lime juice. Just a goodbye after they were done.

One of India’s most recognisable sportsmen, the 90-year-old Milkha Singh, is yet to hit the course, but his son, Jeev Milkha, was there at the Chandigarh Golf Club with his friends.

His age kept the senior Milkha away from the course, but the younger one was out there with Uttam Singh Mundy, former pro and now CEO of PGTI, Gurbaaz Mann, a former pro and now a coach and Ajeetesh Sandhu, a regular on Asian and PGTI Tours.

Maintaining social distance and wearing an assortment of masks (Mundy had the most fashionable one), they all enjoyed rounds of golf.

Amritinder Singh, a former Asian Tour pro and now a swing coach for Jeev, accompanied all of them.

Jeev said, “To be honest, it was most relaxing to be out and playing golf after such a long time. More than two months since I hit a ball. So a bit of rust, but nobody will mind that. We were just happy to be on a golf course.”

He called it a liberation of the mind.

“We knew what we were in for temperature check, sanitiser, one-cart-one-person, carts sanistised, no shaking hands, high-fives from far and maintaining social distance.

“We golfers are used to a lot of discipline, so respecting the ‘new’ rules in these times was part of that,” added the 48-year-old Jeev.

“Maybe what I missed was my Dad on the course, where he is a regular. But since he is 90, he was not allowed and he sure missed the action,” said Jeev.

“There were no stunning shots. But everybody was really excited to be on the course after two months. A lot of funny shots were hit on the course but we were all grateful to be playing after a long time.”

With no caddies they have not been allowed back as yet at Chandigarh Golf Club since many of them come from containment zones – one person drove the cart with thee bags and others walked the course.

“We are used to walking as pros, so that was perfect,” said Jeev.

“Just being back on a golf course was exhilarating,” said Sharma.

Ghei, whose first and most famous Asian Tour win – the Gadgil Western Masters – came at this course 25 years ago, said it was ” so strange” being away from the sport.

“It is the only thing I have done and it’s the thing I know best and it has been my livelihood for three decades. So it’s great to be back playing golf, even with rules that we never even thought of.”

Kapur’s final verdict was: “It’s not the golf I grew up with. But, this could be the new normal. Yet, I am happy being able to swing a club after such a long time.”