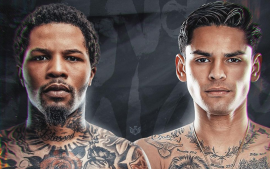 Gervonta Davis fight:- Who will ‘Tank’ Davis fight next? Opponent, date , and venue

Gervonta Davis Fight: After two years of social media teasing, Gervonta Davis vs. Ryan Garcia appeared to be a reality. Garcia declared Thursday that he and Davis would square off in Las Vegas in 2023. Also, Davis confirmed it with a tweet. Before that bout, Davis would lock horns with Luis Garcia in January.  Follow UFC Fight Night Lewis vs. Spivac LIVE Streaming updates with InsideSport.IN.

Also Read: UFC News: Is there a UFC fight tonight?

Who will Gervonta Davis fight next?

Meanwhile in the Capitol One Arena in Washington, D.C., on January 7, Gervonta Davis will defend his 135-pound championship against Hector Luis Garcia. For many years, both boxing fans and fighters have been calling for a matchup with Ryan Garcia. Davis simply needs to defeat a different, less well-known Garcia in January to make his dream a reality.

I’m so pumped this fight is finally in place — I want it more than anything right now. I’ve put in the work, I’m at the prime of my career, and I know I’m going to be the biggest boxer in the world. That legacy starts today🥊 pic.twitter.com/6Hv5y3hwMY

I’ll be back in the ring Jan 7 stay tuned for more details! After that it’s me and Ryan signed sealed delivered…done deal!

Davis (27-0, 25 KO) fought just once in 2022, stopping Rolando Romero in the sixth round in May. Romero outboxed Davis for most of the battle before Davis delivered a devastating left hand that stopped the contest. Over the past few years, Davis has risen as one of the sport’s brightest young stars, and his incredible power has carried him from super featherweight to super lightweight.

After a phenomenal year, Luis Garcia (16-0, 10 KO) is coming off of it. He replaced Roger Gutierrez, the WBA super featherweight champion, against Chris Colbert in February after Gutierrez was forced to withdraw due to COVID. Garcia outclassed Colbert despite being a +1100 outsider to win by a significant margin.

Having won, Luis Garcia, an Olympian from 2016, will now compete against Gutierrez for the title. Due mainly to Gutierrez doing little to nothing for the first eight rounds of the fight until his team started making stoppage threats, Luis Garcia prevailed and won the title. Gutierrez stepped up during the closing rounds, making Garcia appear overpowered, but it was too late, and Luis Garcia won the bout.

To fight Davis, who had previously held the same belt that Garcia finally defeated Gutierrez for, he now switches to lightweight.