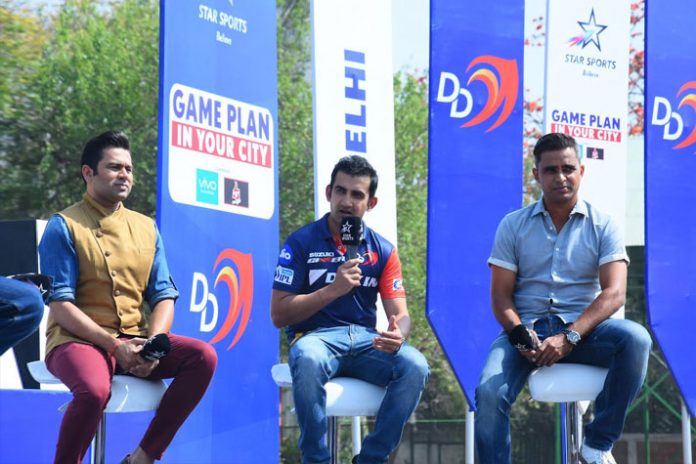 Game Plan in Your City, Star Sports’ build up show for the Indian Premier League, brought together the three veterans of Delhi cricket – Gautam Gambhir and Rajat Bhatia from Delhi Daredevils along with Star Sports experts Aakash Chopra.

Gambhir and Chopra, sharing the stage for Game Plan in Your City’s arrival in the Capital, have been among the opening pairs to serve the Delhi Ranji Trophy team for the longest. The show in the Capital was anchored by Jatin Sapru, the Star Sports face for live presentations.

The seasoned panel analyzed the Delhi Daredevils’ squad for VIVO IPL 2018 and discussed what the fans can expect from their team from the upcoming season, Star Sports has stated in a media release.

Chopra, a former Delhi and India opener, said: “Delhi has added some great player to their squad in the VIVO IPL Auctions this year. I am particularly excited to watch Gambhir and Maxwell play together. The team coached by Ricky Ponting also features Rishabh Pant, Shreyas Iyer, Morris, Mayank Agarwal, Boult and Rabada amongst other players which makes them a strong squad on paper for this year’s tournament.”

“Delhi is home and it feels great to be back to my roots. I started my IPL stint with Delhi Daredevils and it played an important role in shaping the leader in me back then. I hope we can apply our collective learnings from the past few years and guide the team to its maiden IPL title. Having a legend like Ricky Ponting will certainly add depth to the side and help us develop a winning strategy for the upcoming season,” said Gautam Gambhir.

He further added, “Game Plan is a great initiative by Star Sports to engage with youngsters and help them identify with the team even more, it made me go back to my school days, when we used throng the studios and stadiums to catch a glimpse of our stars.” Gautam Gambhir, Captain – Delhi Daredevils.

Star Sports has planned to make the VIVO IPL a six-month fiesta for cricket lovers. The host broadcaster for the IPL will start telecast of Game Plan in your City shows Saturday, March 10, 2018, in Hindi and English languages. , being recorded in the home cities of all the eight IPL franchisees.

In the lead-up to the tournament, Star Sports is offering fans 60 hours of dedicated programming per month featuring a daily dose of proprietary shows such as Game Plan, Cricket Countdown and Franchise specific episodes.