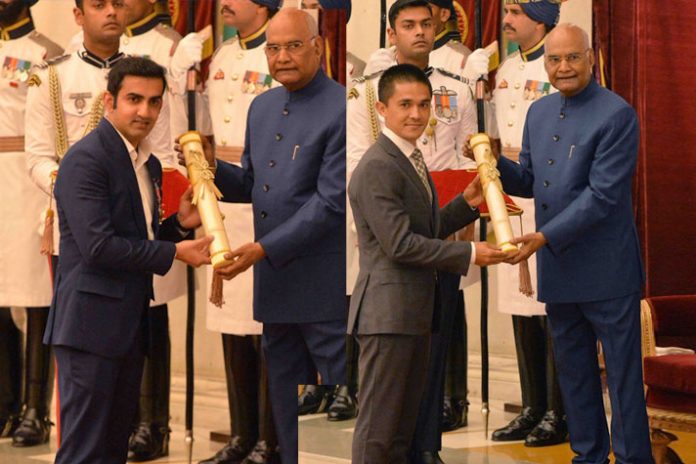 Indian football team captain Sunil Chhetri and former international cricketer Gautam Gambhir have received the Padma Awards from President Ram Nath Kovind. Archer star Bombayla Devi and basketball player Prashanti Singh were the other sportspersons among the recipients to get the Padma Awards on Saturday.

“This is for all the supporters of Indian cricket and my critics. Both have played a part in my journey…some day will discuss who played more than the other,” said Gambhir in his Twitter post.

This is for all the supporters of Indian cricket and my critics. Both have played a part in my journey…some day will discuss who played more than the other @BCCI #padmashriaward pic.twitter.com/zrMrAEikKB

President’s office has tweeted the picture of Chhetri, receiving the award from the President.

President Kovind presents Padma Shri to Shri Sunil Chettri for Sports. He is the captain of national football team and is currently the all time leading scorer and the most capped player for India pic.twitter.com/sxKTvyN0Qq

Bachendri Pal, who became the first Indian woman to reach the summit of Mount Everest in 1984, has been bestowed with the honour for ‘distinguished service of a high order’ was the only sportsperson on the list to be conferred a Padma Bhushan award while the rest were given Padma Shri.

Here is the full list of sports athletes conferred with the Padma Awards this year: