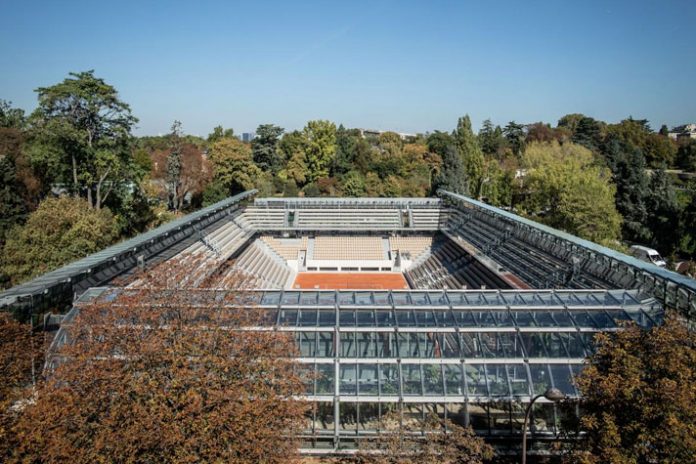 French Open is all set to have a new court at the Stade Roland Garros for the action starting from May 16. The all-new Court 3 for the French Open is being heralded as “the most beautiful tennis stadium in the world”.

After Central Philippe-Chatrier and the Court Suzanne-Lenglen, Court Simonne-Mathieu is the venue’s third show court and is set to be recognized as one of the most unique tennis arenas in the world, French Open organisers have stated.

A 5,000-seat court, it is housed beside the adjoining Serres d’Auteuil botanical garden and has incorporated 1,300 square meters of greenhouses, with the new stadium located within these.

Fans will be able to walk through gardens containing plants from all corners of the world before, during and after the matches, with FFT president Bernard Giudicelli describing the venue as “the most beautiful tennis stadium in the world”.

The sunken venue is named after one of French tennis’ most iconic figures Simonne Mathieu, who was born nearby in Neuilly sur Seine and took up tennis aged 12 due to ill health. Her brother urged her to take up the sport as he was a member of the Stade Français club, and by 1925 she won the French Junior Championships and competed in the French Open for the first time, reaching the quarterfinals.

Although she twice won the French Open, her first in 1938 aged 30 and again the following year, it was on the doubles court where she excelled, winning 11 major titles (nine in women’s and two in mixed), making her France’s most decorated female tennis player behind only Suzanne Lenglen.

Indeed, such were her achievements, the women’s doubles trophy at the French Open is named after her. Motherhood did not stop her pursuing her tennis goals, with her globetrotting lifestyle taking her to half the countries in the world in 15 years.

It was when she was scheduled to play the American Championships in August 1939 that her life took a turn, with France and Britain declaring war on Nazi Germany.

In light of this news, Simonne Mathieu rushed home to join the resistance, signing up with the Auxiliary Territorial Service, the women’s branch of the British Army, in 1940 and putting her tennis career on hold to aid the war effort.

So impressive were her achievements in this field that she became a commanding officer in the French Women’s Volunteer Corps and would march up the Champs Elysées alongside General de Gaulle when Paris was liberated in 1944.

Simonne Mathieu is remembered as a passionate and impulsive competitor, drawing reproach at the 1936 Wimbledon championships for her language after she threw her racquet down and exclaimed: “Even this damned net is English!” after its cord had sent the ball out of reach on several occasions.

On September 17, 1944, a match was organized to celebrate France’s liberation, with Henri Cochet and Yvon Pétra playing and Simonne Mathieu in the umpire’s chair, a triumphant return to Roland-Garros.

The court named in her honour will first see action on May 26 at the 2019 French Open, which runs through until June 9.

The next major stage of renovation work at Roland-Garros will see Court Philippe Chatrier have a retractable roof installed for the 2020 tournament.