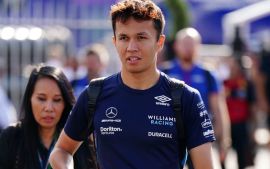 Formula 1: Williams confirms Alex Albon for 2023 season on a new MULTI-YEAR deal, says want to achieve MOST from this season – Check Out

Formula 1: Williams have reported that Alex Albon will keep on racing for Williams for 2023 and beyond, as a component of…

Formula 1: Williams have reported that Alex Albon will keep on racing for Williams for 2023 and beyond, as a component of a long-term deal with the well-known British group. But, darkness looms over Nicholas Latifi as his contract ends at the end of the season. Follow Formula 1 updates on InsideSport.IN

“I am really excited to be staying with Williams Racing for 2023 and look forward to seeing what we can achieve as a team in the remainder of this season and next year. The team has made some strong gains this year and it’s exciting to continue this journey and further develop our learnings together,” Albon said.

BREAKING: Alex Albon to remain with Williams for 2023 and beyond!#F1 @WilliamsRacing pic.twitter.com/2kG4SfY0zj

Albon joined Williams for this season as a swap for George Russell, after Red Bull let him out of his agreement as he was satisfying their reserve driver duties. The Thai driver has conveyed a line of strong results and even scored all the team’s points so far through the tenth spot in Australia and ninth in Miami GP.

Our number 23 stays for 2023 and beyond!@Alex_Albon commits his future, signing a multi-year contract 👊#WeAreWilliams pic.twitter.com/MJ4aMXoFZj

Meanwhile, Albon has registered two DNFs this season as they came at Monaco and British GP. On top of it, he sees himself 19th overall in the drivers’ standings with just 3 points to his name.

Williams’s team principal is delighted with the news and said, “Alex is a tremendous driver and valued member of Williams Racing, so we’re thrilled to be able to confirm we will be working with him on a long-term basis.”

“Alex brings a great blend of skill and insightful learnings that will help bring the team greater success in the future. He’s a fierce competitor, has proved a popular and loyal team member and we are delighted that he will provide a stable base for us to continue to develop in this new F1 car era,” Capito added.

Moreover, it stays unclear who Albon will accomplice one year from now at Williams, with Nicholas Latifi’s agreement lapsing toward the end of this season. Albon’s news comes two days after Aston Martin reported Fernando Alonso would race for the group next season and a day after Alpine named Oscar Piastri as the Spaniard’s substitution, just for Piastri to consequently say via social media that he wouldn’t be driving for the French group in 2023.