Formula 1: AlphaTauri boss Franz Tost in AWE of Max Verstappen, says he REMINDED me of Michael Schumacher – Check Out

Formula 1: Franz Tost praises Max Verstappen as he reminded him of Michael Schumacher: The team principal of AlphaTauri, Franz Tost thinks highly of Red Bull’s Max Verstappen as the Dutch driver went on to clinch his first F1 title last year at the controversial Abu Dhabi GP while overtaking Lewis Hamilton on the last lap of the race. Meanwhile, the driving style of Verstappen reminded Tost of the legendary Michael Schumacher. Follow Formula 1 & Belgian GP LIVE updates on InsideSport.IN

Tost believes that Verstappen will get better in the coming seasons as he has shown a lot of maturity. “I met Max for the first time with his father at the Nurburgring, when he was driving karts at the time. The next time was at the Norisring in Formula 3. In the rain, he drove in a league of his own, as if he was the only one who had discovered a dry line. He immediately reminded me of Michael Schumacher,” Tost said.

“You could see what a mega talent Max was. After all, we took some criticism when we entrusted him with Toro Rosso at the age of 17, someone who didn’t even have a driving licence. He also did his first training session at Suzuka, one of the most difficult circuits of all. But Max did it all with aplomb. He never had any problems with the great speed of a Formula 1 car, as he always had everything under control right from the start,” Tost added.

Meanwhile, Tost has backed the Dutch driver as he feels Verstappen has still more to give to the sport after being one of the finest drivers present in the pinnacle of motorsport.

“In his first races he was sometimes a little too aggressive. That sometimes led to a crash, for example in Monaco with Romain Grosjean. Today he is driving at an extremely high level. Nevertheless, we haven’t seen the maximum from him yet. Only Charles Leclerc can come close. Lewis Hamilton has already suffered too much from the ravages of time,” Tost concluded.

Despite the fact that for some, 2021 was the time when Max Verstappen saw a rise in his F1 career, actually, there were at that point individuals who had accompanied him and who knew about his ability.

Now, Verstappen looks to secure his second F1 title in the 2022 season as he enjoys a healthy lead over Ferrari’s Charles Leclerc. Meanwhile, Verstappen leads the drivers’ standings with 258 points and is 80 points ahead of Charles Leclerc who has 178 points.

It will be a stroll in the park for Verstappen if he continues his current form in the remaining nine races as no one in the history of F1 has come from behind and taken the F1 title. So, the work is cut out for Leclerc, if he needs to challenge Verstappen for this year’s title. 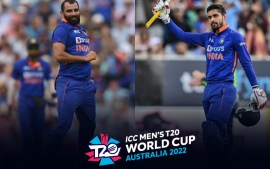