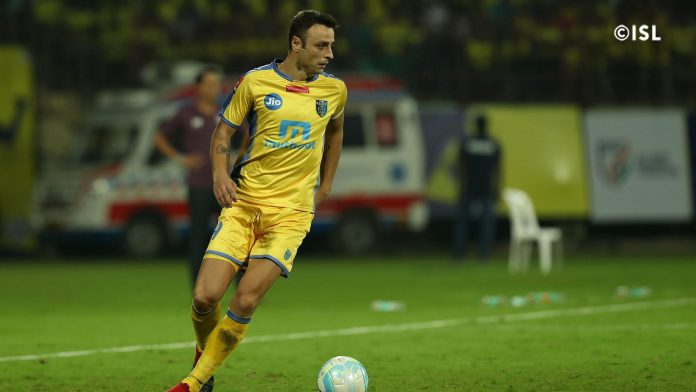 Record seven-time Bulgarian Footballer of the Year and former Manchester United star Dimitar Berbatov has announced his retirement from professional football. Berbatov played for Kerala Blasters FC in Hero ISL 2017-18 and his last match for the Kochi-based side will go down as the Bulgarian icon’s final match on the professional arena.

Berbatov has been one of the most celebrated personalities in the game in the last two decades and over the span of his illustrious career, played for some of the top clubs across the globe.

Since making his senior professional debut all the way back in 1999, the striker went on to play his club football in seven different countries, with his time in Germany and England proving to be the finest of his career. He burst onto the scene with Bundesliga outfit Bayer Leverkusen, with whom he enjoyed a brilliant six-year spell. In a total of 202 appearances for Bayer, Berbatov scored 91 goals and provided 34 assists.

English Premier League club, Tottenham Hotspur soon came calling, opening the floodgates for the striker to establish himself as one of the best strikers in Europe. After two seasons and 27 Premier League goals, Manchester United secured his signature in a very high-profile move. In his five seasons at the Theatre of Dreams, Berbatov scored 56 goals and provided 27 assists in close to 150 appearances. He helped create some of the greatest moments in the club’s history and won three Premier League titles, two League Cups, three Community Shields, one Club World Cup and the Premier League Golden Boot back in 2010-11.

After stints with Fulham, French outfit Monaco and Greek club PAOK, Berbatov arrived in India ahead of the Hero Indian Super League (Hero ISL) 2017-18 season, after signing for Kerala Blasters. The striker made his debut against two-time Hero ISL champions ATK and went on to represent the Blasters in nine Hero ISL matches. His only goal for the club came in the reverse fixture against ATK at the start of February 2018.

On the international stage, Berbatov has played 78 competitive matches for Bulgaria and scored 48 goals – the joint highest in the country’s history.