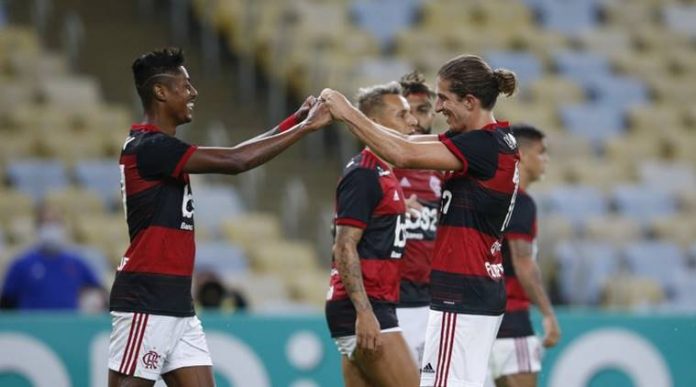 Brazilian football resumed after a three-month hiatus on Thursday night, with Flamengo beating Bangu 3-0 at an empty Maracana stadium in the first game of the restarted Rio de Janeiro state championship.
The match marked the return of Brazil’s state leagues, most of which were halted in March as the novel coronavirus spread.
Most of the other state championships, which are usually played between January and April before the national leagues take place in the second half of the year, have not yet set a date for resuming.
The resumption in Brazil has caused controversy, with two top clubs, Botafogo and Fluminense, saying they will not turn up for scheduled games this weekend.
Another 1,238 people were reported to have died in Brazil on Thursday from COVID-19 – the illness caused by the coronavirus – taking the overall death count to 47,748.
Only the United States has recorded more deaths.
Thursday night’s game at the Maracana began after the two sides arrived at the stadium to be met by a handful of fans, some of whom were protesting the policies of Brazil’s far-right president, and others who carried placards celebrating the 70th anniversary of the stadium.
There were no supporters inside the ground and reporters and officials had to undergo stringent security procedures before entering.
Another five games are scheduled to take place between June 19 and June 22.
Uruguayan midfielder Giorgian De Arrascaeta scored Flamengo’s first goal after 17 minutes, striker Bruno Henrique got a second 20 minutes into the second half and Pedro Rocha added a third two minutes from time.