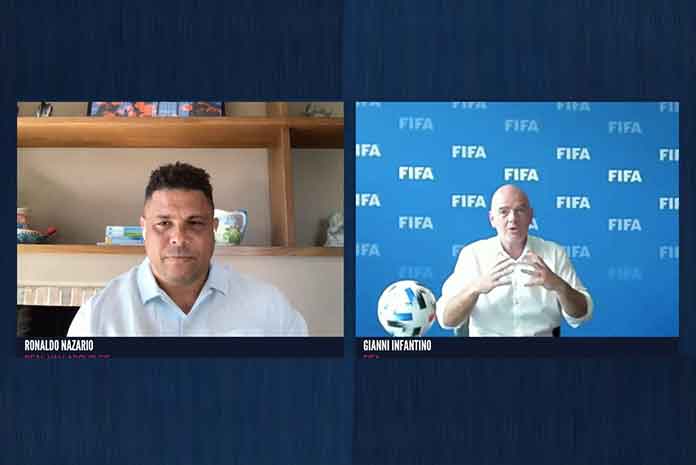 FIFA President Gianni Infantino is keen to engage in dialogue with clubs and federations over the future of football’s calendar, a calendar that has already been completely shaken up by the Covid-19 pandemic. This is one of the main issues that Infantino addressed as he appeared in the closing session of WFS Live powered by Ronaldo, a Q&A which was hosted by Ronaldo himself.

The Brazilian legend asked the FIFA president about football’s calendar going forward and Infantino pointed out that it has already been shaken up due to the several months of inaction that the pandemic caused. Given that so many found the balance between club and national team matches problematic even before the crisis, now is the time for dialogue.

FIFA President says, ’no one happy with the current calendar’

As Gianni Infantino said: “When you speak about it, you find out that nobody is really happy with the current international match calendar. You have national team games in September, October and November, then in March and then in June. You have players who have to travel halfway around the world back and forth for these games. I think it is time to speak about it.”

“It’s important to listen, to get input, to get opinions, to find the right balance,” he continued. “It’s important for us that we find the right balance between clubs and national teams. And not only a few clubs in Europe and a few national teams in Europe and Brazil and Argentina, but much wider than that. All over the world. We need to make sure that when we rethink our competitions at FIFA level, and also at national level, that we take the experiences we’ve had now with this crisis on board and we see how we can make football more impactful.”

“Nobody is really happy with the current international match calendar. You have players who have to travel halfway around the world back and forth for these games. I think it is time to speak about it.” – Gianni Infantino, FIFA President
FIFA President on Club World Cup competition

The new-look FIFA Club World Cup will have a place in the new calendar, even if FIFA already agreed to move it from the summer 2021 slot. Ronaldo asked why not all in the football industry have been on board with the plans to revamp and expand this Club World Cup, and Infantino responded as so: “I don’t know why they’re afraid. Maybe because it would become the best club competition in the world very soon. I think it’s an example of something I’ve said before. When we decided to do the new Club World Cup, we decided at the same time to stop with the Confederations Cup and the current Club World Cup. I think we are the only sports body in the world that doesn’t just add, but that replaces and makes something that is more relevant and more interesting.”

Delving into the impacts of COVID-19 on the world of football, Infantino told Ronaldo about how FIFA is trying to help organisations around the world and how a relief fund of 1.5 billion dollars has been created. Even still, there are no one-size-fits-all solutions.

One of the repeated themes of the WFS Live week, which was held from July 6th to July 10th, was the issue of women’s football and how the impact of the coronavirus crisis could be even harsher for the women’s game. FIFA are aware of this, as Infantino explained.

The conversation between Ronaldo and Infantino concluded with some thoughts about football and footballers’ role in social movements, such as Black Lives Matter. Infantino explained that he is fully behind players voicing opinions on such matters, saying: “Players are people. So, for me, it’s normal and natural that they express their views. I’m definitely a defender of freedom of expression, always with respect and never with disrespect or with violence. But, whenever a football player is expressing their views or opinions in a respectful way or the right way then obviously this has to be welcomed because it has an impact in society and we want football to have a positive impact in society.”

Ronaldo completely agreed with that sentiment and called for education to play a role. As the Brazilian concluded: “The fight against racism is not just a fight for black people, it’s everybody’s fight. We have to fight it every day. Nobody is born racist, but somehow people learn to be racist. We have to fight to teach those who learn that when kids. But, it’s everybody’s fight.”