DAZN, the global digital sports media company is reportedly in market to raise $1Billion. But simultaneously DAZN has also confirmed a new…

DAZN, the global digital sports media company is reportedly in market to raise $1Billion. But simultaneously DAZN has also confirmed a new sub-licensing deal with Discovery for domestic rights to 40 matches from German soccer’s top-flight Bundesliga.

The over-the-top (OTT) service had a sub licensing deal in place with Eurosport, the US media company’s pan-European sports network, for both the 2019/20 season and the 2020/21 campaign but that was scrapped amid a dispute between Discovery and the German Football League (DFL).

Citing the coronavirus pandemic, Eurosport terminated the 4 year, US$402 million rights contract it signed in 2017 one year early, thus removing a US$83 million liability for the 2019/20 season and its rights fee for the upcoming campaign.

But the German Institute of Arbitrators ruled the termination unlawful.

Football Business : How many Bundesliga games with DAZN stream on the platform ?

The new deal, confirmed by DAZN, includes 45 games in total and features the German Supercup and the relegation playoff matches.

Similar to the package it sublicensed last season, DAZN will broadcast 30 Bundesliga games on Fridays, and five each on Sundays and Mondays during the 2020/21 the season. The first game on DAZN will see Bayern Munich host Schalke on 18th September.

With the new agreement in place DAZN will be able to build up its Bundesliga viewership ahead of the 2021/22 to 2024/25 rights cycle, for which it secured a bigger package of matches.

Splitting the rights with the Bundesliga’s main broadcast partner Sky Deutschland, DAZN will air 106 matches per season. That contract was agreed in June, with the DFL bringing in US$5.2 billion across the four years for its domestic rights.

DAZN has invested heavily in sports rights in Germany over the last 12 months, that includes the UEFA Champions league rights in the territory starting next year. 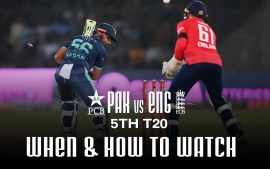 PAK vs ENG LIVE: Pakistan AIMS to come Strong against England in…