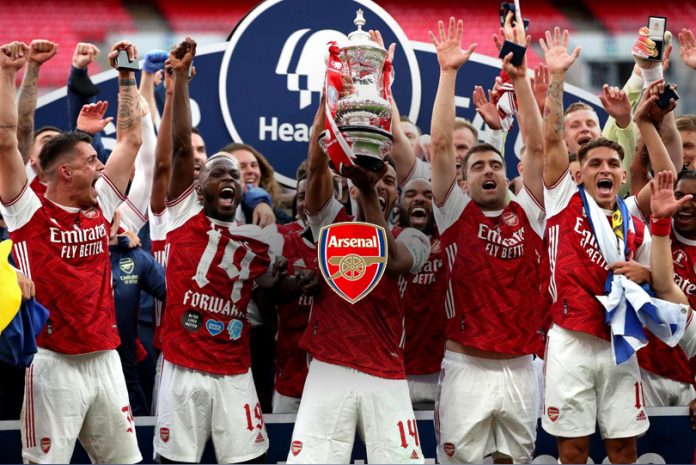 Recently crowned FA Cup champions Arsenal is planning to cut 55 staff members because of the financial impact of the coronavirus pandemic. According to a report in BBC, Arsenal has decided to make this move because of  “more significant and longer-lasting reductions in the revenue than the club had hoped”.

Arsenal earlier in April had reduced the salaries of head coach Mikel Arteta. The Spaniard along with the Gunner’s first team players had taken 12.5% salary cut. Not only this, Arsenal’s executive staff also agreed to waive more than a third of their salaries over the next 12 months.

But now club has decided to take some more measures to reduce the costs in the wake up lower than expected revenues from the season.
Premier League LIVE : Arsenal planning to lay-off 55 staff members

The Gunners who had less than satisfactory season in the Premier League, recently defeated Chelsea 2-1 to win the FA Cup for one more time. But like others, according to the club they have been hard by the Covid19 pandemic. The club has declared that the drop in revenues is far more than they would have expected. Arsenal has, cited the loss of revenue from fans likely not being able to return to Emirates Stadium for the start of the 2020-21 season and only in limited numbers after that. They said revenue from broadcasters, matchday and commercial activities had all been “hit severely” and that the club are facing one of the “most challenging periods” in their history.

“We are witnessing more significant and longer-lasting reductions in our revenue than we all hoped”.

Arsenal added they did not take the decision to propose redundancies “lightly” and had looked at “every aspect of the club and our expenditure before reaching this point”.

“We know this is upsetting and difficult for our dedicated staff and our focus is on managing this as sensitively as possible,” the club concluded in a statement.

The redundancies are in the football, commercial and administration departments, with the majority coming in the latter two.There will also be cuts to staff benefits, capital projects and discretionary projects, but investments will continue to be made in the playing staff and Arsenal’s transfer plans are unaffected. The Arsenal Supporters’ Trust (AST) told BBC Sport it is looking for more information from the club to explain the plans.

In a statement, AST said it had hoped the players’ wages cuts “would be used to ensure all Arsenal staff are looked after in these difficult times”.

It added that it would be contacting the club to make sure that the staff let go “are given as much support as possible”.

The statement said agreed wage cuts and investment from owner Stan Kroenke had helped “reduce the impact of the pandemic on the club” and “maintain investment in the team”.

However, they added: “It is now clear that we must reduce our costs further to ensure we are operating in a sustainable and responsible way, and to enable us to continue to invest in the team.”