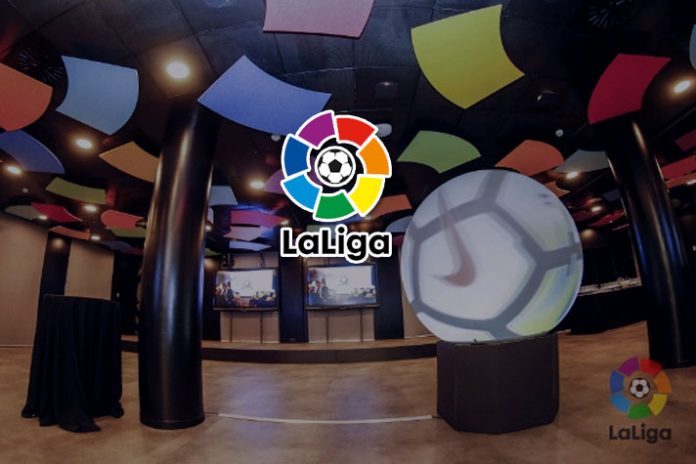 LaLiga launches exclusive programmes ‘LaLiga StayAtHome‘ , ‘LaLiga Nations’ and ‘LaLiga Clubs’ for football fans in the Indian subcontinent on LaLiga’s Facebook page. Through these programmes LaLiga aims to highlight the best of the league beyond football to help strengthen the fan base and connect with newer audiences despite the ongoing postponement of the competition.
‘LaLiga StayAtHome‘ will feature once every week for 26 minutes only on LaLiga’s official  Facebook page @LaLiga. The First episode will have famous sports personalities such as Quique Setien (Barça coach), Carlos Bacca (Villarreal striker), Sergi Gomez (Sevilla defender), Alex Moreno (Real Betis left-back), Eduardo Zubiri (Osasuna nutritionist), engage and inspire fans about how they are living through the lockdown and what precautions are they taking and ensuring to maintain their fitness routines and diet.
Also Read: Setback for La Liga as Renan Lodi of Atletico Madrid, 4 others tests positive
‘LaLiga Nations’ will be aired over the course of 10 weeks with one episode each week of 26 minutes. This initiative will showcase the importance and impact of present and past football players of different nationalities have had on LaLiga and Spanish football as a whole. The first episode will have Di Stefano, Maradona, Messi from Argentina, the country that has contributed most players to LaLiga, followed by players from UK, Brazil and other countries in the following episodes.
‘LaLiga Clubs’ segment will showcase the history of 20 Spanish clubs within their cities, and the connection between the cities, the teams and their people. It will outline the significance of each club, their fans sense of belonging, their importance in Spanish football and their uniqueness. This programme will be aired fortnightly and will have six episodes of 26-minute each.
Jose Antonio Cachaza, Managing Director, LaLiga India said “It is our constant effort to bring engaging and exciting content closer to fans, and never has it been so important for us to engage with our fans in newer ways. In a situation as difficult as the current one, football fans will be able to remain close to their idols and learn more about their favourite players, their clubs, their cities, and their history. Through these programming initiatives, we aim to showcase that LaLiga is much more than the fixtures and highlights the story of the land, club, and players which make LaLiga the best League in the world. We hope that these initiatives will further expand our fan base to a much larger and diverse audience and help us spread the joy of football”
In February 2020, LaLiga along with Facebook has profiled all 20 LaLiga Santander clubs through the “Behind the Goals” series. The weekly series has taken fans through the history of the club, players, titles and trophies, the stadium and more about the lifestyle and culture in the region.