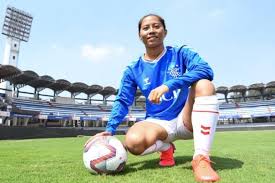 Star striker Bala Devi says India will have to build on the legacy of hosting the women’s U-17 World Cup and Asian Cup if the country is to raise its football standards by a few notches.

The 30-year-old senior national team trailblazer is also hoping for an Indian Super League-style women’s league in the near future.

India will host the FIFA U-17 World Cup in February-March next year and then organise the Asian Cup in 2022.

“I think if a few youngsters do well in the U-17 World Cup, they might be called up for the senior team camps as well, so this would be a good transition. These two years will be very exciting for Indian football, but I think the follow-up is even more important,” Devi told PTI in an interview.

“We need to have a good league and a legacy after these two landmark events. Girls need to play full time in schools, colleges, academies and finally in fully professional or semi-professional teams.

“I am hoping for an ISL-type scenario for women’s football in future,” Devi added from Scotland, where she is currently based.

Devi, who has played more than 40 matches for the country since 2005, is the first Indian woman footballer to ply trade in a top-flight professional league in Europe. She currently plays for Rangers in the Scottish Premier League.

The league though stands suspended since March due to the COVID-19 pandemic. She had featured in two matches before the suspension of the league.

She said the impact of hosting the 2022 Asian Cup will be huge and the country must cash on it.

“We do not get much exposure but with this tournament (Asian Cup), hopefully, we can get a lot of interest in women’s football in India. I think for the country, it’s a huge step but we can follow it up with even more regular tournaments in the future.

“We never know, but hopefully, we will host the FIFA Women’s World Cup someday. I hope clubs do follow and invest in women’s football after this tournament so we have full time women’s professional players in India,” said the player from Manipur.

Asked about India’s chances in the tournament, she said, “Personally, I am very excited about this opportunity to play at home in the biggest tournament at Asian level.

“But, it’s difficult to say how we will perform in this tournament. Let’s hope we put in a lot of good practice and play a lot of matches ahead of the tournament and then you never know with home support we could get a few favourable results.”

India has done well in the past in the women’s Asian Cup, with two runners-up and one third-place finish, but this will be the country’s first participation since 2003.

“In the past, we did not get much access to women’s football on television so I don’t really know what the level was. Right now, we get to see some matches and we know that Japan, Australia, South Korea are all very strong nations in women’s football and do well at the World Cup level as well.

“Right now, we cannot compare with them. Japan has won the women’s World Cup in 2011 and just to play with them would be great exposure for us.”