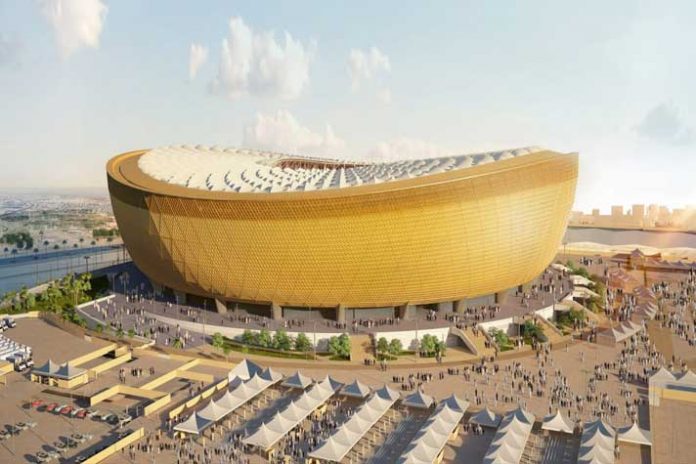 The FIFA World Cup 2022 hosts Qatar has revealed the first look of the 80,000 capacity Lusail Arena, the biggest of the eight stadiums proposed to host the next edition of the FIFA World Cup finals.

With its golden bowl structure and apertures shaped like “fanar” lanterns, the stadium celebrates the Middle East’s ancient tradition of craftsmanship.

“Lusail is a city for the future, and once the World Cup is over it will – like each of our other seven stadiums – form a crucial part of the legacy of the tournament as it transforms to become the heart of a brand new community,” said SC Secretary General HE Hassan Al Thawadi, underlining that the stadium is situated at the heart of a whole new city.

“It has now been eight years since we won the rights to host the 2022 FIFA World Cup and we told the world to expect amazing. With this stunning design of our showpiece stadium, I am proud today to once again be delivering on that promise.”

“I am delighted to see Qatar’s continued commitment to excellence in the spectacular Lusail Stadium,” added FIFA Secretary General Fatma Samoura. “Qatar’s stadiums are among the most eye-catching ever seen and the venue proposed for the final is absolutely gorgeous. I particularly enjoy the fact that Middle East culture is reflected in Lusail’s and several other designs and look forward to seeing football fans from all over world discover the culture and history of this region.”

According to the SC, infrastructure works at Lusail Stadium are progressing in all areas, with internal works having commenced in the west stand. The construction of the stadium is scheduled to be completed in 2020. In 2017, Khalifa International Stadium became the first proposed venue to be ready, while two more stadiums are scheduled to be completed early next year – Al Wakrah Stadium and Al Bayt Stadium – in Al Khor.

The Qatari-Chinese, $45 billion joint project is set to be completed in 2020. Designed by British architects Foster and Partners, the stadium is one of the largest infrastructure schemes undertaken by Qatar.

The unveiling of Lusail comes as world football’s governing body Fifa is still considering whether to expand the tournament from 32 teams to 48. If that expansion occurs, it is likely that games will be shared among other countries in the region.