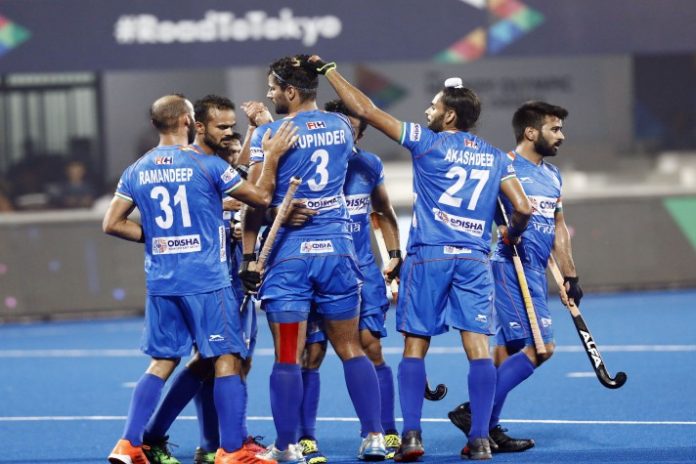 Indian hockey team will debut in the FIH Pro Hockey League next year. But the sights during the competition will be set on a bigger goal – real training for the Tokyo 2020 Olympic Games.

The Indian men’s and women’s teams have booked the Tokyo 2020 hockey competition tickets with wins over USA and Russia respectively in the last qualifying opportunity at Bhubaneswar.

The recently concluded FIH Hockey Olympic Qualifiers Odisha saw both the Indian Men’s and Women’s Hockey Teams come out on top, and secure their respective berths in next year’s Olympic Games to be held in Tokyo, but one man had one extra reason to celebrate. Indian Men’s Hockey Team’s experienced drag-flicker Rupinder Pal Singh featured for the Indian Men’s Hockey Team after a long lay-off away from the national side, and his performances in the two matches helped the team in defeating World No. 22 Russia 11-3 on aggregate.

Also Read: It’s yet to sink in that we have qualified: Hockey team skipper Rani

The 28-year-old Defender spoke about his return to the Indian team. “It was an amazing feeling to be back in the India blue after having missed out on some major tournaments last year. I was determined to perform well for my team, and make sure that we secured our place in the Tokyo 2020 Olympic Games. Russia gave us a tough fight, but we showed our quality in the end and secured the two wins. The comeback was good for me, and it now gives me a lot of confidence to do better in the upcoming season,” said Rupinder who serves as a Manager for a government bank in Chennai, and reported for duty after helping India secure their place in the Tokyo Olympics.

Looking forward to the Indian Men’s Team’s prospects of playing in the FIH Pro League for the first time early next year, the experienced drag-flicker said it will be a good test for his side. “The FIH Pro League was a great success in its first edition, and we are all very excited to be a part of it next year. These matches will be a great test for us, especially playing against the best teams from around the world. We will be hosting as well as touring some very strong teams in the next eight months, and I can’t wait to start our preparations for the same,” said Rupinder.

“Our aim was to make sure we qualified for the Olympics, and now that we have secured our place, it is now time to put everything into preparing for the Olympic Games. We have nine months to prepare for the quadrennial event, and playing in the FIH Pro League will serve as good preparation for us. We will be able to determine where we stand against the top teams, and we will have enough time to make improvements and corrections in our game leading up to the Olympics,” said the drag-flicker from Faridkot, Punjab.

The Indian Men’s Hockey Team is scheduled to return for the next Training and Conditioning Camp on 18th November 2019 in Bhubaneswar as they look to focus on their fitness ahead of next year’s FIH Pro League. “We have a three-week conditioning camp in Bhubaneswar where we will be given a debrief of our FIH Hockey Olympic Qualifiers, and will then focus on keeping our bodies ready for the new season. In this crucial phase, injury prevention is also a key area for us, and we will look to place special emphasis on our fitness as we regroup for bigger goals next year,” concluded Rupinder.