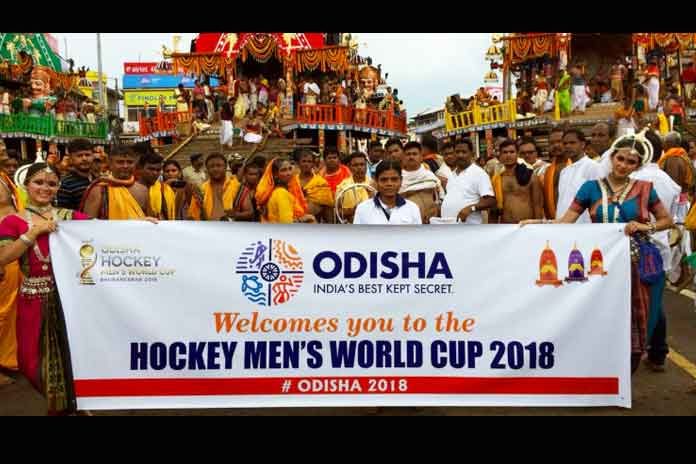 The clock is ticking fast for field hockey’s biggest ever event to start in Bhubaneswar, Odisha. For FIH, it doesn’t get bigger than the Quadrennial Olympics and FIH Men’s Hockey World Cup. While the Olympics technically are an International Olympic Committee event, Men’s World Cup becomes the biggest showpiece competition under the banner of the world hockey federation – FIH.

The 14th edition of hockey’s most prestigious event will be declared open at the Kalinga Stadium, Bhubaneswar, Odisha, on Tuesday afternoon.

The Bhubaneswar World Cup will be the biggest ever competition, not just in term of the participating teams – 16 – but also for its organisational budgets and grandeur. Odisha State Chief Minister Naveen Patnaik is leading from the front to make his dream ₹200 crore event a grand success.

Amidst numerous national and international initiatives, many first of their kind, the State Government has declared that the educational institutes and Government offices in Odisha will remain closed for the FIH World Cup inaugural events.

The grandeur of the World Cup goes far beyond the lush blue synthetic turf at the Kalinga Stadium in Bhubaneswar. The City of Temples is painted in the colours of the Hockey World Cup as the Odisha is also leveraging the event to show case the vibrant colours and cultural diversity of the State to promote tourism.

The Star-studded opening ceremony on Tuesday (November 27) will have a performance by Oscar Awards winner composer and singer AR Rahman. One of the highest-paid entertainers in the country, Shah Rukh Khan will share the stage with Rahman.

As the Kalinga Stadium is not equipped to house the thousands of hockey enthusiasts for the opening ceremony. Overwhelmed with the incredible response Hockey India has announced additional celebrations at the Barabati Stadium in Cuttack on November 28.

The celebrations will virtually replicate the opening ceremony at the Kalinga Stadium, Bhubaneswar, with the performance by AR Rahman, while some other Bollywood stars are also being lined up.

The rule for excellence in sports promotion is applying in letter and spirit to the Hockey World Cup 2018, scheduled in Bhubaneswar from November 28.

The official anthem for the Odisha FIH Men’s Hockey World Cup features two of the supreme entertainers of India – AR Rahman and Shah Rukh Khan. The anthem is penned by noted lyricist and poet Gulzar.

The Odisha Government, in charge for hosting the event in a manner never before, had released the teaser of the official anthem, featuring music composer AR Rahman and Bollywood’s King Khan, Sharukh Khan, over the weekend.

Mahanayak Amitabh Bachchan had turned to stars of Indian hockey to seek support for the Odisha FIH Men’s Hockey World Cup 2018. The Big B, invoking support of the top Indian hockey stars had shared his photograph with the Indian hockey team stars from the sets of Kaun Banega Crorepati with the message that the sportspersons are the pride of the nation. They are the pride and glory of the flag.

CM leads from the front

Chief Minster Naveen Patnaik has led the Odisha State government’s massive marketing campaign for the World Cup. Bhubaneswar is painted in the colours of the World Cup – from the State Government offices to the airport.

Fifty city buses plying on major routes in Cuttack, Bhubaneswar and Puri are used to promote the hockey tourney.

Hoardings are installed at all major places in Bhubaneswar, Puri and Cuttack, as well as along national highways connecting Bhubaneswar with Cuttack and Puri. Flags of participating countries are displayed at the airport, Janpath and the roads leading to the venue.

Odisha by Day – Hockey by Night

In a bid to attract foreign tourists to India, the State Government is running high decimal campaign ‘Odisha by Day and Hockey by Night’ as it promoted the Hockey World Cup in various cities around the world.

The State had promoted the events in London and Australia before hitting the roads in Munich, Germany, with the select city buses carrying the message, ‘Odisha by Morning, Hockey by Evening’.

The campaigns, integrated with Odisha Tourism promotion, also carried messages to enjoy the cultural and colours during the day time and the game by the evening with slogans like – Surf by Morning, Turf by Evening (highlighting) the beautiful Bay of Bengal coastline; and Migratory Birds by Morning, Migratory Fans by Evening (an obvious reference to the Chilika Lake bird sanctuary and numerous wildlife sanctuaries in the State.

Like London and Sydney, the buses will do a 360 degree promotional campaign across Munich till November end. The campaigns are coincided with major events in respective cities. Like the FIH World Cup bus on the Munich roads rolled out during the world’s largest folk festival ‘Munich Oktoberfest’.

The CM had also launched the promotional campaign in Mumbai.

Giant Screens at All Panchayats

Chief Minister Patnaik has directed his legislators to make arrangement of big screens for live viewing of the matches in every Gram Panchayat of the State. The CM has also allocated budgets from Biju Yuva Vahini scheme so that the big screens can be installed in these areas.

The Sports & Youth Services Ministry will monitor the installation of these screens. In addition, LED screens will be installed in Bhubaneswar, Cuttack and other major towns and cities so that people who fail to get tickets, can watch the match LIVE. LED screens will be installed at 12 places of the Odisha capital for public viewing during the Men’s Hockey World Cup.

The colourful inauguration programme will be broadcast live on the giant television screens at the panchayat level in the State. Expecting a huge crowd near the LED screens, police force will be deployed near each of the 12 LED screens. The State has over 6,000 panchayats.

Astro Turf at all Blocks

The aim of the State Chief Minister is not just highlight the one-off event of global magnitude. Patnaik has a vision to make Odisha the Hockey State of India. As hype builds up with the Word Cup, the CM has also announced that synthetic turfs will be installed in all blocks of Sundargarh district in recognition of its contribution to hockey and to promote the sport.

“Probably, Sundargarh will be the only districts with largest number of astro turfs in the country. And will continue to produce world class players who will play for the country,” the Chief Minister had said during an exhibition hockey match series which Odisha XI won

In recognition of the Sundargarh district’s contribution towards hockey, astro turfs will be established in all the blocks of the district, Chief Minister Naveen Patnaik has announced.

A 360 degree campaign, HeartbeatsForHockey is launched to engage people to support the sport and understand it through music, entertainment, fashion, sport and panel discussions. The social campaign includes players from the hockey team who would urge the public with the tagline, “My heart beats for hockey, does yours?”

An important part of the campaign is the “Hockey Adda”, an on-ground discussion platform.

With an unprecedented budget to host the FIH World Cup, the State of Odisha is not just determined to make the quadrennial event a memorable event for thousands of fans, players and officials turning up for the event from across the world. The initiative goes far beyond to establish the World Cup as an important date in the sporting history of the State.