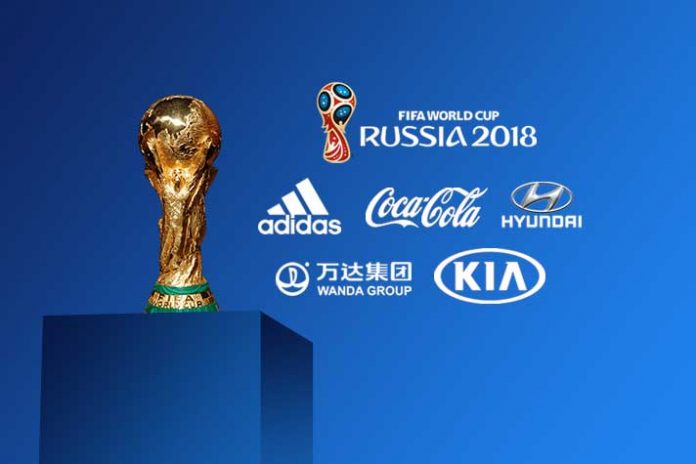 FIFA World Cup 2018 is due to kick-off in Russia on June 14 with the hosts going against Saudi Araba in the Group A. Brands and businesses around the world are already in full gear to leverage this most coveted spectacle of world sport through various marketing campaigns, brand activations and TVCs that will strike the screens during the month-long broadcast of 64 matches.

A few among them are global business powerhouses, with an international brand appeal. These mega brands have invested millions of dollars to support the world governing body of football and its biggest quadrennial event. Some of these partnerships are counted among the biggest and lucrative sponsorship and deals signed ever in the history of sports.

Many among them, in the process, have etched long-standing mutually beneficial alliances that have brought up the level of football among the world’s most popular sports and at the same time provided the brands with mass reach culminating into billion dollar profit figures annually.

InsideSport.co has compiled the list of official sponsors and partners that will be supporting this year’s edition of the world cup and many more to come in the far future.

The top tier sponsors list includes some of the global powerhouses and multinational corporations which have a long-running alliance with FIFA – some of them even exceeding three decades!

Adidas – The- German multinational sports goods and apparel brand has earned the title of the longest-running sponsor/partner of an international sports federation. The relationship between FIFA and Adidas dates back to nearly 50 years. Since 1970, Adidas has been supplying the official match ball for all FIFA World Cup games.

Among the Adidas line of legendary balls were the Tango (1982), the first ball to successfully combine leather and polyurethane, the Azteca (1986), the first fully synthetic ball, the Questra (1994), the polyurethane foam-based ball, the Tricolore (1998) which introduced a syntactic foam layer and the +Teamgeist (2006) that has set new standards with its innovative and highly iconic design and panel-technology. And now the most iconic ball ever made – Telstar 18 – will be witnessed this season.

Besides the mega quadrennial event, the brand also supports other FIFA events like FIFA Confederations Cup Brazil 2013, the FIFA U-20 World Cups for women and men as well as the FIFA Beach Soccer World Cup etc. At all these events, FIFA officials, referees, volunteers and the entire Youth Programme (player escort, ball crew, flag bearers) wear Adidas products from head to toe.

Coca-Cola – Another long-standing FIFA Partner, the Coca-Cola Company started its formal association in 1974 and an official sponsorship of FIFA World Cup that began in 1978. Coca-Cola has had stadium advertising at every FIFA World Cup since 1950. The partnership has now been extended to cover all major football spectacles until 2030. It also sponsors the closely watched FIFA/Coca-Cola World Ranking for men’s national teams and FIFA Women’s World Ranking.

Wanda Group – Founded in 1988, the Chinese conglomerate is engaged in three key business activities – commercial properties, culture and finance. Some of its commercial properties include the world’s largest real estate enterprise and the biggest five-star hotel in the world. Wanda Cultural Industry Group, meanwhile, is the largest cultural enterprise in China, and the world’s largest cinema operator. The group has signed a long-term deal as a FIFA Partner until 2030.

The group played a key role in the transformation of Chinese football in 1993, including the establishment of Dalian Wanda F.C., the nation’s number one professional football club, the Group has had a long affiliation with football. Wanda has also shown a constant support for the development of football in China, with a special focus on the growth of grassroots football through China’s Future Star Program.

Gazprom – Gazprom is a Russia-based global energy company. Its major business lines include geological exploration, production, transportation, storage, processing and sales of gas, gas condensate and oil, sales of gas as a vehicle fuel as well as generation and marketing of heat and electric power. Holding the world’s largest natural gas reserves, the company is the only producer and exporter of liquefied natural gas (LNG) in Russia.

Hyundai/Kia Motors – Following its successful participation in the 2014 FIFA World Cup Brazil Hyundai, along with its sister company Kia, will continue to look forward to its role as the Official Automotive Partner of FIFA until 2022.

Hyundai began its alliance with FIFA in 1999 when it signed the agreement to sponsor 13 FIFA competitions including the 2002 FIFA World Cup Korea/Japan. This agreement was subsequently extended to the 2006 FIFA World Cup Germany, where Kia began its football sponsorship campaign – followed by its second term as one of six FIFA Partners from 2007 to 2014. In 2010, Hyundai / Kia Motors signed a long-term agreement to continue the partnership until 2022 as the official ground transportation service provider for the FIFA World Cup.

Qatar Airways – The award-winning airline is an Official Partner and the Official Airline of FIFA. It will, in addition to the 2018 FIFA World Cup in Russia, support upcoming FIFA events like the FIFA Club World Cup, the FIFA Women’s World Cup and highly anticipated 2022 FIFA World Cup in Qatar, the airline’s home country.

Together, Visa and FIFA have created unique programs at FIFA tournaments that reinforce the value of the brand, build client business and enhance the football experience for Visa account holders. Visa account holders also benefit from exclusive access to tickets for FIFA tournaments via Visa sponsored pre-sale events. Visa-branded credit, debit and prepaid cards are preferred by FIFA for all goods purchased at official FIFA stores, in venues and online at FIFA.com.

Budweiser – Anheuser-Busch-owned world’s popular beer brand was among the earliest to sign a deal with FIFA as the official FIFA World Cup Partners. The brand since then has been heavily leveraging and integrating the frenzy of the football’s biggest quadrennial event through its iconic global campaign “Light Up the FIFA World Cup.” The campaign highlights the most ambitious beer delivery ever through a variety of creative executions, including its :15, :30 and :90 seconds ads.

Hisense – One of China’s largest consumer electronics companies, Hisense became an Official Sponsor of the 2018 FIFA World Cup Russia in April 2017. The company, through its global marketing and advertising activities, was also engaged in FIFA Confederations Cup 2017. Hisense televisions will be the official televisions of Russia 2018. The company has earlier said that the partnership with FIFA will see Hisense reach over 200 territories and greatly enhance its international brand exposure.

Vivo – The popular Chinese smartphone brand is known for gargantuan sponsorship budgets for the professional sports league in India such as the Indian Premier League and the Pro Kabaddi League. In June last year, Vivo was announced as the official smartphone sponsor for FIFA World Cup 2018 in a deal reportedly worth 40 million Euro (Rs 2,900 crore). The deal runs until 2022 and will also include 2022 FIFA World Cup in Qatar and FIFA Confederations Cup 2017 and 2021.

McDonald’s – The American burger and fast food chain has sponsored the World Cup since 1994. It pays FIFA between $10-25million a year under the current agreement that runs until 2022. Various reports emerged last year that the fast food brand was considering to end its ties with the world governing body amid rising ethical concerns, corruption and scandals. The Russian edition of the World Cup was dogged in myriad controversies ranging from corruption in the bid process and State-sponsored doping programs involving Russian footballers.

In October 2015, McDonald’s called for former president Sepp Blatter to step down in the face of FIFA’s continuing corruption crisis and also made clear to the new leadership that they expected serious improvements. The ties have improved to a plausible extent after Gianni Infantino took the charge of FIFA as president in 2016.

Mengniu – The football fans in Russia will get a sweet treat to China’s popular dairy product and ice cream brand Mengniu. After signing the deal with FIFA in December 2018 as Russia 2018 official drinkable yoghurt and pre-packaged ice cream partner, Mengniu Group had acquired the rights to broadcast a seven-minute commercial during each of the 64 World Cup matches.

The dairy company had signed football legend Lionel Messi as their brand ambassador this year. With the right to conduct marketing campaigns for its 27 products around the World Cup, the company has earlier stated that it intends to spend over $300 million on marketing campaigns featured for the event slated for 14th June to 15th July.

The electric two-wheeler brand Yadea is among the seven Chinese brands who will be the part of 2018 FIFA World Cup in Russia. Yadea, announced as a regional supporter for Asia region in February this year, is reportedly coming up with multi-million dollar campaigns around its e-scooters and e-bikes to bring out the brand globally.

Russian telecom firm Rostelecom, Chinese men’s business attire brand Diking and LUCI, a China-based global technology and entertainment experience company, are other Asian regional supporters for this edition of the FIFA World Cup. Among them, Diking and LUCI are the latest signings, announced as late as less than 10 days from the FIFA World Cup 2018 kick off on June 14.