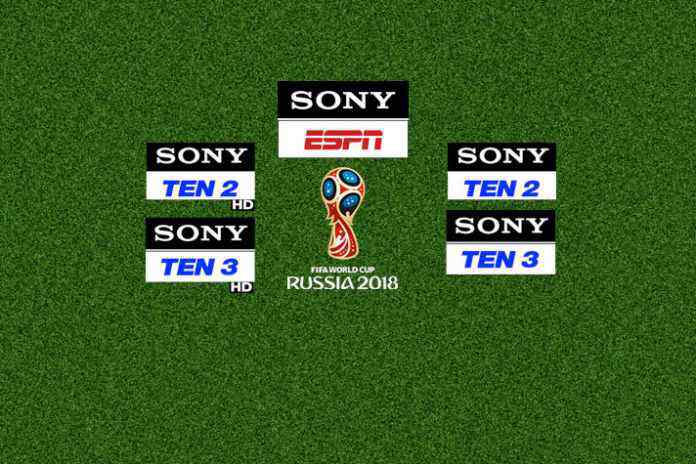 Sony Pictures Network India is targeting ₹ 270 crores in ad sales revenues for the FIFA World Cup 2018 finals in Russia. The FIFA World Cup 2018 official broadcaster in India has made a strong sales pitch driven by a reach to over 100 million television audience across six network channels and OTT platform Sony Liv. The numbers are ambitious but the dice is heavily loaded in favour of Sony.

The numbers, going by the past record might appear ambitious, but are highly realistic as the FIFA World Cup 2018 in Russia is loaded with numerous favourable factors for the Indian television audience.

Sony Pictures Network India in January 2104 had acquired the FIFA Media Rights for five years at $100 million. Of this deal, $40 million were attributed to the 2014 Brazil World Cup, while the present edition was valued at $ 60 million. According to insidesport.co sources, Sony has recovered a 10% ($ 6 million) of this commitment from the media rights sublicensing in the sub-continent. The remaining 90% has to come from the Indian market.

“This is a big ask, but the number are not unrealistic,” a leading media buyer told Indsidesport.co. “India has a good market for FIFA World Cup content. The brands which feared the 2014 Brazil edition will not make a big impact on Indian television were surprised by the audience data. In Russia, the timings are ‘tailor-made’ for Indian television. That is a big boost for television ad sales.”

“Four years ago Sony had 38 brands on board. This time the interest is much larger. People are ready to pay ₹ 16 crores for a broadcast partnership, which was sold for ₹12 crore four years ago. It is a flat 33% premium,” adds the media buyer, who is negotiating deals for his clients.

SPNI is aiming to reach out to 100 million viewers during the 64 FIFA World Cup 2018 Games between June 14 and July 15. The FIFA Under-17 World Cup in India has been an indicator of the rising popularity of football in the country. Sony India’s dedicated coverage of 879 hours across ESPN, Sony Ten 2 and Sony Ten 3 had attracted 71.6 million audiences for the junior World Cup.

Even when the timings were not suitable for Indian television audience, the 2014 Brazil edition has registered 85.7 million TV audience in India – up from 44.9 million six years ago.

In Russia, the earliest matches will start at 3.30 PM, while only one game has a 12.30 am scheduled start. The majority of the games are scheduled for 8.30 pm and 11.30 pm IST. These kick off timings are more suitable to football fans in India, who traditionally have been supporting their “doosri country” every four years.

SPNI will broadcast the FIFA World Cup finals in four languages across six network channels. SONY TEN 2 SD and HD channels will carry the world feed in English. The Hindi language live broadcast will be aired on SONY TEN 3 SD and HD. Sony ESPN SD channels will have the live action for the Bangla and Malayalam speaking football fans.

The live action will also be available on the SonyLiv app or on SonyLiv.com for the SonyLiv subscribers, while the others on the move can catch a five minute delayed streaming.

Sony has in the past claimed a successful partnership with FIFA. The FIFA World Cup 2018 has all the ingredients to take this relationship to a new high.