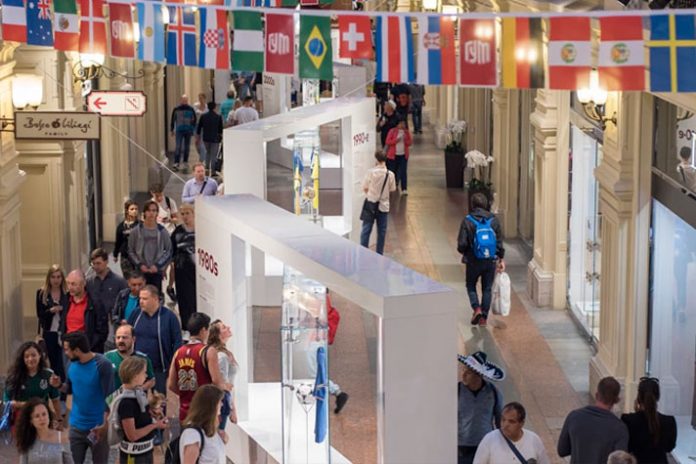 With 4 days left for the curtains to go down for the FIFA World Cup 2018 in Russia, the “Qatar @roadto2022” exhibition is now open at the historic GUM department store in Moscow.

The exhibition showcases the plans and football history of the next FIFA World Cup hosts.
Located on the ground floor of the store, the free attraction offers visitors a fascinating trip through football history, with memorabilia including match-worn shirts from legends such as Pele, Diego Maradona and Xavi Hernandez, along with mascots and official balls from past tournaments.

The exhibition showcases Qatar’s plans for the next edition of the tournament in 2022, while celebrating the country’s football history, including the comprehensive FIFA World Cup tickets collection of Qatari collector Mohammed Abdulatif.

“The objective of the exhibition is to engage with football fans in Russia and introduce them to Qatar’s preparations for the World Cup,” said Kayed. “We want to showcase the passion for football in Qatar and highlight football’s unique ability to unite people of all cultures and backgrounds.”

In addition to viewing memorabilia, visitors to the exhibition are given the chance to record a personal message for the people of Qatar. They can also view sculptures created especially for the exhibition by leading Qatari and Russian artists.

The exhibition is open from 10:00 am to 10:00 pm every day until Sunday 15 July. The Qatar @roadto2022 Exhibition is one of several installations organised by the SC during the 2018 FIFA World Cup. Majlis Qatar and Elements Qatar are attracting hundreds of visitors a day in Gorky Park, while the Qatar-Russia portals are giving people a glimpse of life in the two countries.

The 22nd edition of the FIFA World Cup will take place in Qatar and could possibly see the much-awaited expansion from 32 to 48 teams. Russia and Qatar were selected as the locations for the 2018 and 2022 FIFA World Cups on December 2, 2010.

Qatar 2022 FIFA World Cup will be organised in a reduced timeframe of around 28 days, with the final being held on 18 December 2022, which is also Qatar National Day.