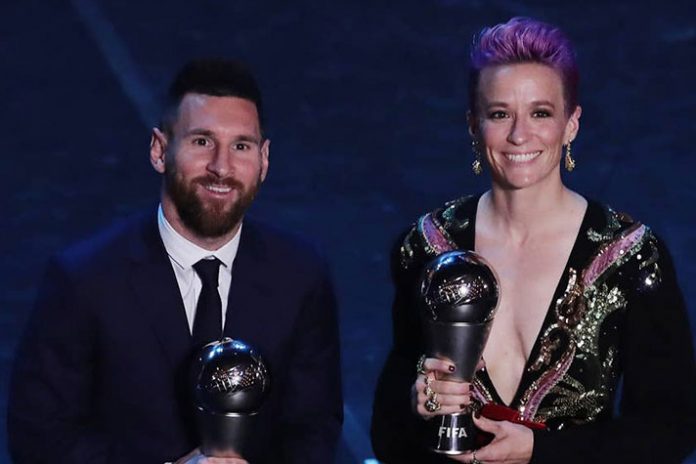 Argentine Lionel Messi and Megan Rapinoe of the USA are FIFA’s official best male and female football players for 2019.

FIFA, the world governing body for football, rewarded the performances of the “foremost artistes of the beautiful game” at the annual The Best FIFA Football Awards 2019 at Milan’s Teartro alla Scala, one of the globe’s iconic cultural centres.

Messi and Jurgen Klopp took home the leading honours for The Best FIFA Men’s Player and Men’s Coach respectively, after their outstanding 2018-19 campaigns which saw both scoop silverware and individual accolades galore.

Among FIFA honours for women, it turned out to be a bumper year for the USA as Megan Rapinoe and Jill Ellis were rewarded for their part in the Stars and Stripes’ triumph at the FIFA Women’s World Cup France 2019 as The Best FIFA Women’s Player and Women’s Coach respectively.

In an event very much geared towards celebrating the women’s game, to honour the legacy of the record-breaking France 2019, Sari van Veenendaal was named the inaugural The Best FIFA Women’s Goalkeeper, joining her custodian counterpart Alisson who picked up The Best FIFA Men’s Goalkeeper award.

There was recognition for a women’s ‘dream team’ for the first time at The Best FIFA Football Awards, with FIFA and FIFPro combining for the first time to honour the FIFA FIFPro Women’s World11. The recipients of the inaugural award were a veritable who’s who of France 2019, with the aforementioned Sari van Veenendaal joined by USA stars Kelley O’Hara, Julie Ertz, Rose Lavelle, Alex Morgan and Megan Rapinoe as well as French duo Wendie Renard and Amandine Henry, Brazilian legend Marta, England’s outstanding performer Lucy Bronze and Swedish rock Nilla Fischer.

The FIFA FIFPro Men’s World11 saw a number of new names enter the fray. Alisson made his debut in the ‘dream team’, alongside Dutch trio Matthijs de Ligt, Frenkie de Jong and Virgil van Dijk. The remainder of the side – Marcelo, Sergio Ramos, Eden Hazard, Luka Modric, Cristiano Ronaldo, Kylian Mbappe and Lionel Messi – retained their place from the 2018 World11. Both star-studded line-ups were elected by thousands of players from across the globe.

The players had their say, and so did the fans, who voted for the heart-warming story of Silvia Grecco to take home the FIFA Fan Award. A public vote also determined the top three of the FIFA Puskás Award, with a panel of FIFA Legends ultimately choosing Daniel Zsori’s remarkable overhead kick as a worthy goal of the year.

The FIFA Fair Play Award was taken home by Marcelo Bielsa and the Leeds United squad, after the Argentinean coach and his team ultimately sacrificed promotion for his team to uphold the values of fair play – instructing his Leeds United team to allow an equaliser after his side had gone 1-0 up with an opposition player down injured.

In an evening that saw the remarkable talents of the Teatro alla Scala Orchestra showcased as the musical entertainment, it was fitting that the orchestrators of beautiful music on pitches the world over were recognised as The Best in Milano.

The Best, in full