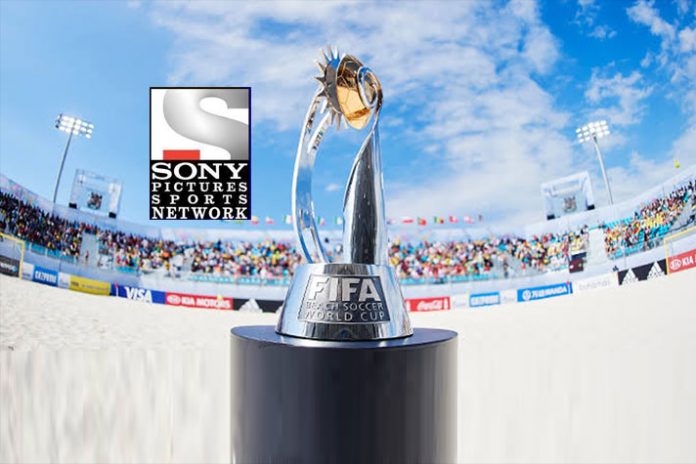 Sony Pictures Sports Network is broadcasting the FIFA Football World Cup LIVE and India, being played in Paraguay from November 22 to 25.

The FIFA Beach Soccer World Cup features the men’s national teams of the member associations of FIFA, the world governing body for football. With this format’s increasing popularity and successful of beach football tournaments in India, Sony Pictures Sports Network its bringing the latest 2019 FIFA Beach Soccer World Cup edition for the ardent community of football fans across India starting.

Beach football, a popular sport in South American countries like Brazil and Argentina, is gaining ground in India as well. Several beach soccer tournaments have been organised successfully from Goa to Kolkata. With beach football’s fresh appeal and interesting format, the World Cup is expected to attract many fringe viewers apart from the hardcore football fans.

As teams across the globe are lock horns on the beaches in Paraguay, here is a look at the potential favourites and the surprise packages featuring in this edition of 2019 FIFA Beach Soccer World Cup, being aired LIVE and EXCLUSIVE on Sony Pictures Sports Network in India for the avid community of football enthusiasts.

With 16 teams qualified for the final tournament from six continental competitions, Brazil leads the pack with the highest score. Two-time champions Russia and 2015 winners Portugal are the other two serious challengers for  the crown as they are the only squads to have eliminated Brazil out of the World Cup. Portugal and Brazil are the only teams to have won the World Cup title before and after FIFA had assumed the governance of beach soccer worldwide. On the other hand, Tahiti, who finished as runners-up at the past two editions, will be hoping to go one step further in the sand of Asuncion.

The teams were placed in four pots based on their previous performances at recent World Cups and their respective qualification tournaments. Hosts Paraguay are considered to be the second-strongest team from South America, and the added boost of having home support will go a long way for the renowned beach soccer powerhouse. Other teams with pedigree in beach football include Italy, Asian champions Japan, African champions Senegal and perennial knockout stage-qualifiers Switzerland. Out of the 16 teams, Belarus are the only team to be making their debut at the Beach Soccer World Cup in Paraguay in this edition.

The Beach Soccer tournament was established in 1995 in Brazil and due to the sport’s rapid growth, FIFA took an interest and re-branded it as an official FIFA tournament. The growing global popularity of beach soccer resulted in FIFA’s decision to move the stage of the World Cup from its native home in Brazil to other parts of the globe to capitalize on and continue to grow global interest. The year 2019 will see the 10th edition of Beach Soccer World Cup under the FIFA banner take place at the headquarters of the Paraguayan Olympic Committee in Paraguay from 21st November 2019 and will be aired in India only on Sony Pictures Sports Network.

Here is the schedule, timings and broadcast details: