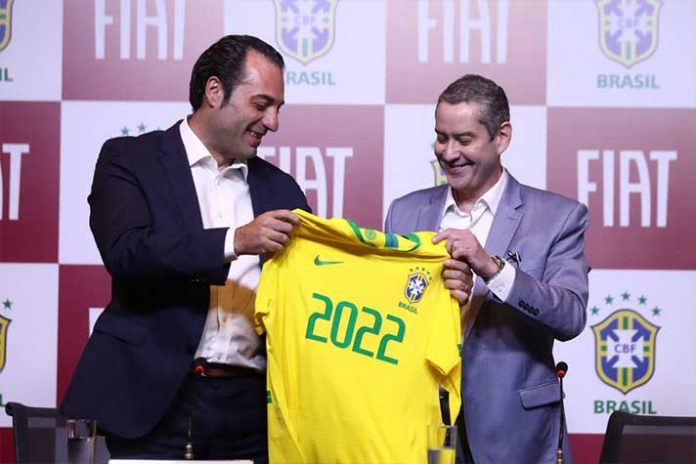 Fiat, the Italian car manufacturer, is the newest sponsor of the Brazilian Soccer Team. FIAT has signed a four-year deal to become a sponsor of the CBF, the Brazilian soccer confederation. The deal covers important international competitions, such as the Women’s World Cup (France), Copa América Brasil 2019, Copa America 2020, Tokyo Olympics (Japan) in 2020, and the 2022 World Cup in Qatar, the men’s and women’s national teams and respective Olympic teams through to the end of 2022. The deal will also support the Olympic teams of Brazil and the grassroots programs of Brazilian soccer until 2022. The financial terms of the contract have not been announced.

CBF president-elect, Rogério Caboclo said that: “The bond with Fiat is highly strategic and comes at an important moment for Brazil’s national teams: while the women’s team enters the World Cup, the men’s team begins a preparation cycle for the World Cup in 2022.

“The shirt of the Brazilian national team is known all over the world, as well as the Fiat logo and products. Both seek talent and are two brands that combine tradition and innovation.”

Fiat’s Latin America president, Antonio Fiolsa added: “It is with great pride that Fiat becomes the official sponsor of Brazilian teams, joining two great passions of our country: football and cars. For CBF, the bond with Fiat is highly strategic and comes at an important moment for the Brazilians: while the women’s team enters the World Cup, the men’s team begins with a strong preparation cycle for the World Cup in Qatar, in 2022.