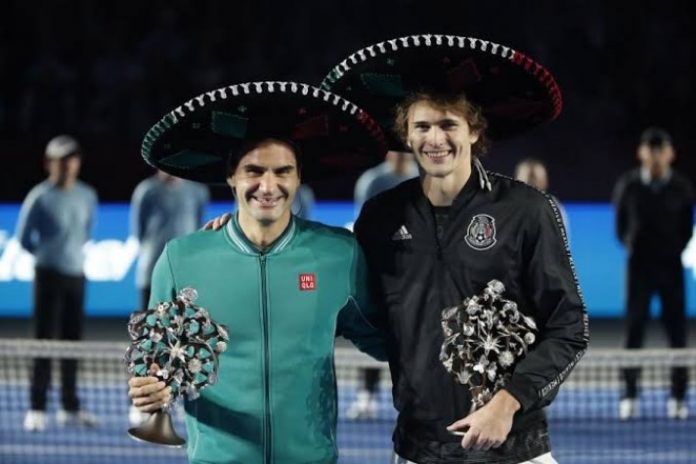 The match between Roger Federer and Alexander Zverev in Mexico City was a “friendly”. It will still go down the tennis history as a world record. The Guinness Book of World Records will be compelled to replace the names of Kim Clijsters and Serena William with Federer and Zverev after nine years.

As Federer beat Zverev 6-3, 4-6, 6-1 in the  “friendly encounter” at the Plaza de Toros in Mexico City, 42,517 tennis fans thronged the galleries. It might be a routine for Federer to win on the international circuit, but more than 42 thousand fans in the stands are the new world record for a tennis match.

This betters the previous world record of 35,681 spectators, created in 2010 during the exhibition match between Kim and Serena at Brussels.

Federer has shared the excitement of the historic moment on his certified twitter handle @rogerfederer. “I will never forget this magical evening in Mexico City with @AlexZverev⁩

42’517 people came, We broke this record together! Viva Mexico,” Federer has stated.

I will never forget this magical evening in Mexico City with @AlexZverev⁩
42’517 people came,
We broke this record together!
Viva Mexico
❤️❤️❤️❤️ pic.twitter.com/z6GJ6Yfq7P

“It means the world for us and tennis to get to write history in Mexico,” Federer has reportedly told the crowd. “It has been 23 years I haven’t come to Mexico and what an error I made. It gave me the opportunity to play in front of one of the best crowds, I have chills.”

Zverev too has tweeted the world record moment with a picture of a pair of shoes.

Alongside the singles, Bob and Mike Bryan played a doubles exhibition with Mexican pair Santiago Gonzalez and Miguel Reyes Varela.

“It was an honor to be a part of history tonight in Mexico City. The Guinness Book of World Records will show that there were over 42,500 butts in the seats to watch. Thanks, Raul, Geoffrey, and @mextenis for including doubles in this amazing spectacle…and thanks to @rogerfederer for selling this place out in 4 hours. What a legend! @mikecbryan @alexzverev123 @gonzalezsanty @mickyrv3,” Bryan Brothers Bon and Mike have started an Instagram post.

Federer while celebrating the success has asserted that the record might not last long. He is scheduled to meet Rafael Nadal in February next to another “friendly” in South Africa. Federer is optimistic that the match in the 55,000-capacity Cape Town stadium will better this record.

Read More: US Open 2019: Nagal goes down fighting against Federer