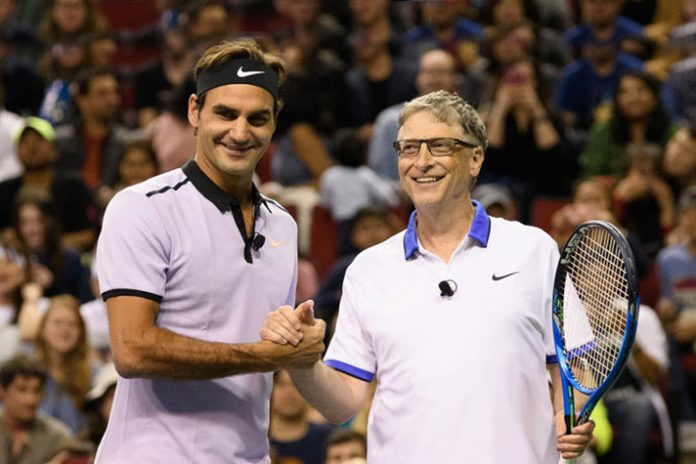 Bill Gates and Roger Federer are set to unite yet again on a tennis court for charity. ‘The Match of Africa 5’ is scheduled for the 5th March at the SAP Center in San Jose. This will also be Federer’s first match of any kind in the Bay Area.

The tennis star and the Microsoft founder billionaire have already partnered once when they had played the Match For Africa 4 in Seattle last April to raise more than $2 million for the Roger Federer Foundation.

However, the man with 93 tour-level titles is not complacent even while heading for an exhibition game. He wants his multi-billionaire partner to get stronger, faster and smarter, ATP World Tour has reported.

The partner in the noble cause, a philanthropist and humanitarian readily obliged. “Whatever it takes, Roger,” said Gates.

Gates did get down to the “Get Better” campaign with Federer. The Microsoft founder lunged hundreds of pounds, lifted tires, did a number of sit-ups that Federer couldn’t keep count while training Gates.

But by the end of their training session, Gates is ready for “Match For Africa 5” in the first week of March. “Roger and I are 1-0 as a doubles pair after last year’s event, so I’m hoping we can keep the streak alive while raising money for an important cause,” Gates is reported as saying by the atpworldtour.com.

“Roger might have a few more Grand Slam titles than I do, but we share a belief that all children deserve a world-class education. His Match for Africa events are a fun way to help make that happen.”

“I believe in the power of people. We know that a good education is a decisive factor to empower children by allowing them to take their future into their own hands… With my foundation, we want to provide one million children with the opportunity for a quality education by the end of 2018. The Match for Africa 5 in San Jose will help us reach our ambitious goals. I am very grateful for this opportunity to collaborate with Bill Gates, who in my opinion is the world’s leading philanthropist” added Federer, who on Sunday set a record for highest prize money earnings in Tennis with his Australian Open triumph for the 20th Grand Slam title in a career spanning two decades.

Federer and Gates will play a friendly one-set doubles match against NBC News’ TODAY co-anchor Savannah Guthrie and World No. 8 Jack Sock of the USA. Federer and Sock will then play a best-of-three sets match.

This is the fifth Match for Africa event for the Roger Federer Foundation, which has given $36 million to support children’s education in six African countries and Federer’s native Switzerland. An estimated 850,000 children across 18 programs have so far benefited from the foundation’s giving, which emphasizes systemic change and sustainable impact.

The Swiss tennis icon has already raised $40 million by playing exhibition games for charity to support the cause of education in Africa.