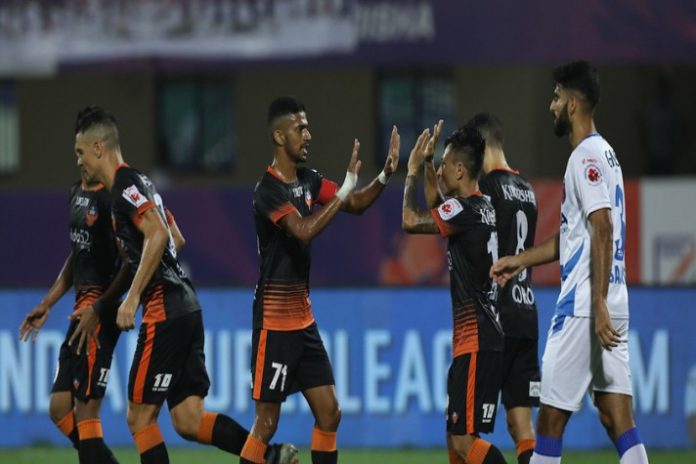 FC Goa edged past a resilient Odisha FC 4-2 to reclaim the top spot in the Indian Super League at the Kalinga Stadium in bhubaneswar on Wednesday.

A Vinit Rai own goal (21st minute) followed by a Jackichand Singh brace (24th, 27th) set Goa on their way to a big win.

But Manuel Onwu (59th, 65th) then struck twice in the second half and nearly brought Odisha back into the game.

A late goal from Ferran Corominas (90+1st) settled the result.

With 30 points from 15 matches, Goa moved three points clear at the top of the table.

Odisha’s playoff hopes took a hit as they remain fourth with 21 points.

With games in hand, the likes of Mumbai City FC and Chennaiyin FC now have a chance to overtake Odisha.

Goa were off to a dominant start, registering more than 60 per cent possession in the first quarter.

Goa’s pressure and dominance yielded three goals in six minutes in the first half.

In the 21st minute, Edu Bedia’s free-kick took a deflection off Vinit and beat goalkeeper Francisco Dorronsorro on its way into the net.

Mandar Rao Dessai ran down the wings and squared the ball for Jackichand whose strike found the corner of the net in the 24th minute.

Three minutes later, Hugo Boumous was gifted space and time on the ball to swing a cross into the box for Jackichand, who slotted home his second with aplomb.

Odisha then scored, thanks to new signing Manuel Onwu who finished well after collecting a clever pass into the box from Vinit, but the goal was ruled offside.

Odisha pressed higher up the field in a bid to get back into the game after restart.

Close to the hour mark, Onwu opened his ISL account with a well-taken header.

Narayan Das whipped a cross into the centre of the box from the left flank and Onwu, who was left unmarked, placed his header into the bottom right corner, out of goalkeeper Mohammad Nawaz’s reach.

Goa looked to hit back immediately as Corominas dribbled past the Odisha defence through the centre. He released Brandon Fernandes into the box, but the strike was kept out well by Dorronsoro.

The hosts fought their way back into the contest and reduced the deficit in the 65th minute. Onwu beat Mourtada Fall in the air from a corner at the near post and his header, which took a deflection off the Goa centre-back, went in.

Odisha continued to threaten as the game inched closer to the full-time whistle, but it was Goa who clinched a late goal to seal the result.

Substitute Manvir Singh broke forward down the right flank on a counter before squaring the ball into the box. It fell nicely for Corominas, who simply turned it in from close range.