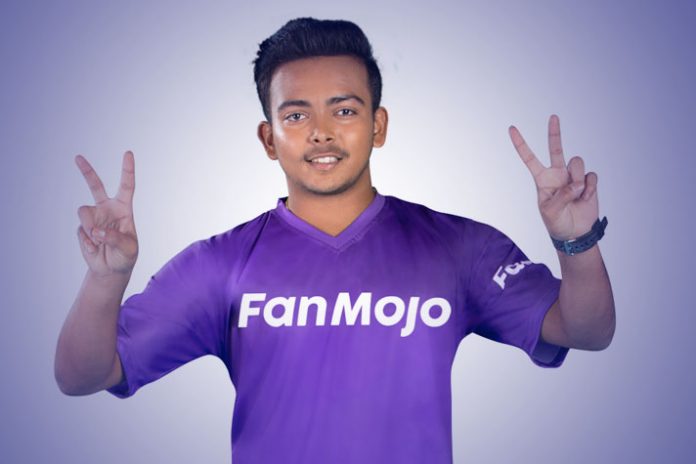 Keeping an eye on the rising popularity of fantasy sports in India, Fanmojo (www.fanmojo.in), a part of U2opia Global, announced their association with the young prodigy of Indian cricket Prithvi Shaw. Known for his immense talent, Prithvi is the former captain of Under-19 cricket team and seen as a role-model for young talented cricketers with big aspirations.

The right-handed batsman who hails from Mumbai has often garnered significant comparisons with the legend of cricket, Sachin Tendulkar. Around ten years ago, one of my friends asked me to take a look at the young Prithvi. He asked me analyse his game and give him some advice. I had a session with him and gave couple of pointers on how to improve his game,” Tendulkar said. Reminiscing watching Shaw, who barely reached the stumps, Tendulkar later told his friend: “Are you watching? That’s a future India player.”

With this association FanMojo aims to strengthen its outreach to the legions of Indian cricket fans in the country.

Echoing the brand ethos — Kaabil Jo, Khiladi Wo; Prithvi is set to encourage young cricket enthusiasts to use their sporting IQ to win rewards. FanMojo offers a chance for avid sport enthusiasts to compete against each other and bag cash prizes by selecting top 11 players in a cricket match.

Commenting on the association, Sumesh Menon, co-founder and Group CEO, U2opia Global said, “We are proud to collaborate with the very talented Prithvi Shaw, who shares in our common belief system – Kaabil Jo, Khiladi Wo. More importantly, our fans are his fans. We are rooting for his success.”

Sharing his delight on the collaboration, Mr.Prithvi Shaw commented, “I am happy to be a part of FanMojo which is one of the fastest growing fantasy sports platforms. I decided to associate with FanMojo as we have synergies in terms of the values and ideology that I follow in life. I am sure that FanMojo with its innovation in the space of fantasy sports will take it the next level.”

Prithvi was also ranked among one of the five breakout stars in men’s cricket in 2018 by the International Cricket Council (ICC).

Fantasy sports platforms are gaining rapid popularity across the globe as viewers not only enjoy the thrill of the sports from the comfort of their homes, but also become a part of the game themselves, winning cash prizes.

Fanmojo.in is a fantasy sports venture where users can handpick their players, use their skill to play games, compete and win prize money.

Re-launched in early 2018, FanMojo has garnered more than 5X user growth in less than a year. The Fantasy League also offers more chances of winning with same day cash outs.

To play on Fanmojo, users, build teams using their expertise and capabilities of the sport, analyzing multiple factors such as player’s fitness, form, weather conditions and past performances. Users can play in paid leagues, where the entry level starts as low as INR 25, making it accessible for all. Users can also choose their level of expertise as well, playing in Beginner, Expert or Pro leagues.

U2opia Global is a Singapore-India based mobile technology company. The company has a diversified portfolio of consumer and enterprise products in more than 70 countries. U2opia Global has verticals across Telcom, Digital Marketing, Gaming, Fantasy Sports, Dating and Media. It was founded by Sumesh Menon and Ankit Nautiyal in 2010. It is managed by an experienced team with a deep understanding of consumers, internet and mobile ecosystems. U2opia Global is backed by global investment arm of the Comcraft group.