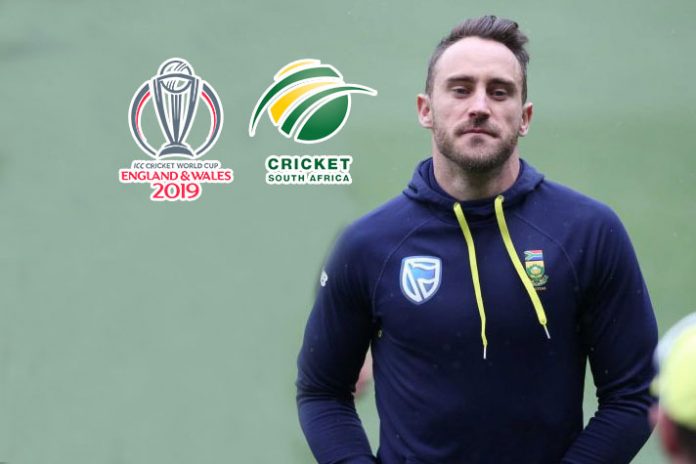 Faf du Plessis will lead a Standard Bank Proteas squad that contains a good mix of players with proven World Cup experience and a new generation of exciting talent at the ICC Men’s Cricket World Cup to be played in England and Wales from May 30.

The Proteas are scheduled to play the tournament opener against hosts England on May 30.

Cricket South Africa (CSA) has named their 15-man squad in a live broadcast at the SuperSport Headquarters in Randburg today (Thursday).

Five of the players – Du Plessis himself, Hashim Amla, JP Duminy, Imran Tahir and Dale Steyn – made their World Cup debuts at the tournament on the sub-continent in 2011 and are thus playing in their third World Cup, Cricket South Africa has stated in a Press release.

Quinton de Kock and David Miller made their debuts in the 2015 tournament in Australasia and will be going to the World Cup for the second time.

“We are very happy with the squad we have been able to put together and have every confidence in their ability to do our country proud at the World Cup,” commented CSA National Selection Panel (NSP) convener Linda Zondi.

“The fact that we have managed to win our last five series in a row in this format against Zimbabwe, Australia, Pakistan and Sri Lanka twice underlines the quality of the team that Faf will lead into the contest. The final selection is also the result of a very rigorous search we have conducted, leaving no stone unturned, to make sure that we have made the best use of the options available to us.

“We feel that Faf’s team is well equipped to handle whatever conditions are presented to them, bearing in mind the weather extremes one can encounter in the British Isles.

“We have also been highly encouraged by the form shown by those of our players who are currently in action in the Indian Premier League and there is no doubt that there is a great sense of anticipation and determination among our players.

“As is well known you need a good squad of 15 players to come out on top with the demanding fixtures list ahead of us rather than just a first XI and I have been particularly encouraged by the depth of talent that has revealed itself to us during the selection process.

“I am also very happy to announce that two of our fast bowlers currently on the injured list, Lungi Ngidi and Anrich Nortje, are well on the way to recovery and we expect them to be ready for our pre-tournament camp next month,” concluded Mr. Zondi.

CSA Chief Executive Thabang Moroe commented: “Congratulations to the National Selection Panel on the work they have done to put a squad together that I am sure will meet with approval from all quarters and will represent us well, and to the players on their well-deserved selection.”

CSA President Chris Nenzani commented: On behalf of the CSA Family and indeed of the entire nation I wish our Proteas everything of the best for the World Cup. I am sure you will all make us proud.”

Along with the squad announcement, CSA also launched #ItsMoreThanCricket, a drive that is aimed to show the country a different side to the Proteas. It will highlight the continuous work the Proteas do as a team to understand one another better, so that they can change for the better. This is a strong fundamental of their dominant team culture.

Like South Africa, the team’s diversity is its strength, when South Africans work together it’s an advantage over the rest of the world. The Proteas are one of the most diverse sports teams in the world and their record over the years proves just how their diversity has been their strength.

Follow the Proteas’ journey on CSA’s social media platforms via the #ItsMoreThanCricket and #ProteaFire hashtags throughout the tournament and upcoming season.