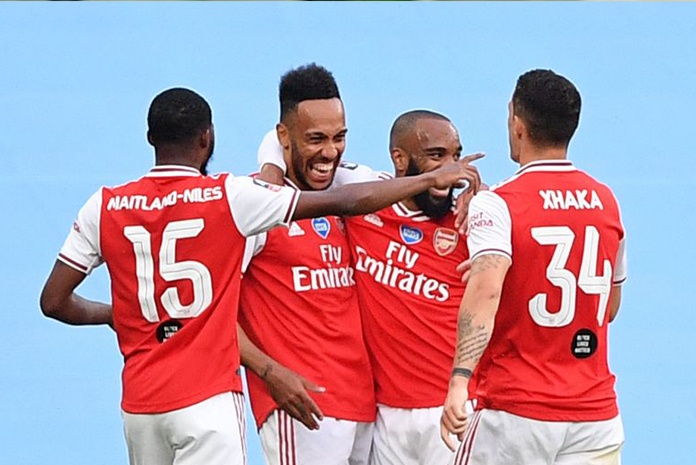 Arsenal booked their place in the 2019-20 FA Cup final with a brilliant win against a lacklustre Manchester City as Mikel Arteta claimed victory over his former boss Pep Guardiola.

A clinical Pierre Emerick Aubameyang was the star of the game as he scored a double that sinked City. Arsenal now awaits the outcome of Sunday’s second semi-final between Chelsea and Manchester United to learn their opponents in the final.

FA Cup Live: Aubameyang scores double as  Arsenal stuns Manchester City 2-0
Guardiola typically made five changes to the side that beat Bournemouth last time out, with Raheem Sterling and Kevin De Bruyne returning as City continued their search for a ninth domestic title from the last ten.

The match-winner was Pierre-Emerick Aubameyang, the world-class striker Arsenal are desperate to secure on a new long-term contract, as he ruthlessly exposed City’s defensive deficiencies.

Aubameyang had already shot straight at Ederson with one clear chance but there was no escape for City after 19 minutes when he showed great technique to steer home Nicolas Pepe’s cross with the outside of his foot at the far post.

City dominated possession after the break but squandered their opportunities and Aubameyang made them pay once more in the 71st minute when he raced away on the angle to slide a composed finish under the keeper.

Arteta, who left his job as Manchester City assistant manager to succeed Unai Emery at Arsenal in December, now has a chance to mark his first season in charge with major silverware when they face Chelsea or Manchester United in the final on 1 August.

Where in India Game will be broadcasted & Live Streamed ?

In India the SemiFinal will be broadcasted and LIVE Streamed on Sony Sports & Sony LIV Channels on 19th July.