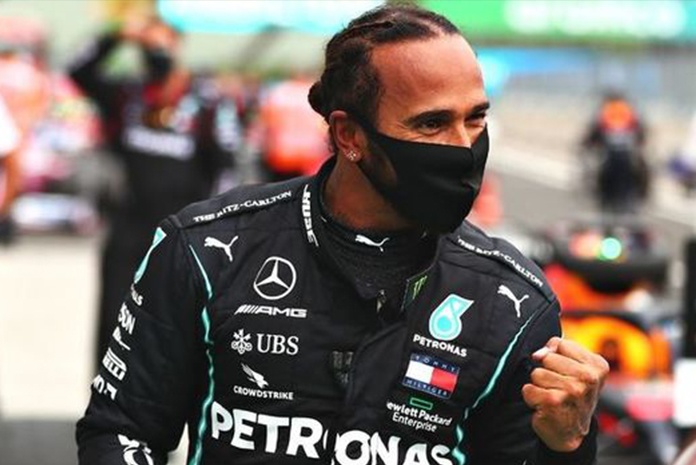 Lewis Hamilton stayed unstoppable on Formula 1 Race circuit in Silverstone as he won the British Grand PRIX for record 7th time in a dramatic fashion. Hamilton finished the race almost on 3 tyres.
Hamilton has now won 3 of the 4 races this season with earlier victories coming in Steiermark GP in Germany and in Hungarian GP. The champion from Britain is now looking extremely good for his 7th world championship title.
Verstappen finished at second and Leclerc finished the race at number 3 position. Ricciardo was fourth, and Norris fifth. Ocon is sixth, Gasly seventh. Albon had eighth. Stroll ninth
The British GP proved to be disappointment for Bottas as he slipped in the last few laps to finish at 11th.
Nico Hulkenberg could not start the race due to technical issues with the car.  Kevin Magnussen was also out on opening lap after Alex Albon collision, Daniil Kvyat had a high-speed spin and crash at Maggots
It’s a bit crazy isn’t it, somehow it fits in. Obviously disappointing for me and the team. Some sort of power unit issue, couldn’t start the car. We’re looking into why. This weekend would have been important to learn more about the car, but it is what it is.
Nico Hulkenberg, Racing Point

Formula One drivers delivered a more cohesive demonstration of the sport’s stance against racism on Sunday when they all lined up on the start-finish line ahead of the British Grand Prix.

After a rushed ceremony in Hungary two weeks earlier, Sunday’s organised showing saw seven drivers choosing to stand while the rest took a knee, facing back towards the grid in a solid unit.

Those who stood this time were Kevin Magnussen of Haas, the two Alfa Romeo drivers Antonio Giovinazzi and Kimi Raikkonen, Carlos Sainz of McLaren, Charles Leclerc of Ferrari, Daniil Kvyat of Alpha Tauri and Max Verstappen of Red Bull.
Before the demonstration, during which six-time world champion Lewis Hamilton wore a “black lives matter” t-shirt while the rest wore “end racism” t-shirts, a video was broadcast in which all of the drivers expressed their support for the sport’s anti-racism campaign.

The ceremony followed days of talks following criticism by Hamilton of the sport’s lack of leadership and cohesion in support of the global anti-racism campaign.