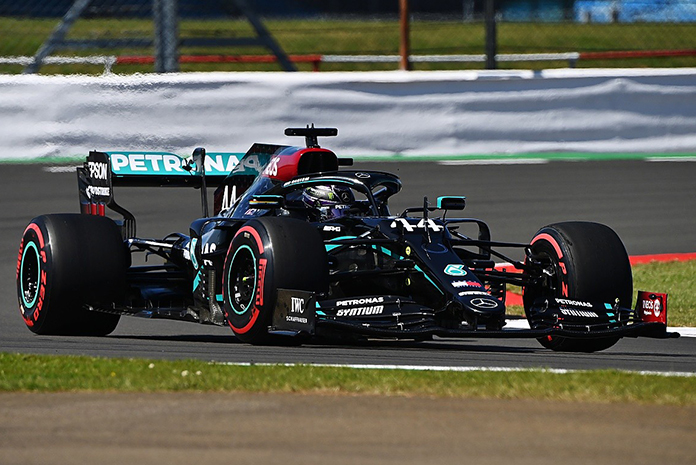 In the Formula 1 70th Anniversary Grand Prix at Silverstone, three practice sessions gone and for the third time in a row it is a Mercedes one-two. Just as it was, in session two, Lewis Hamilton finished the fastest followed by Mercedes teammate Valtteri Bottas who finished number two.

Hamilton was 0.176 seconds ahead of Bottas but on different tyres.Mercedes were assessing which tyres might be most suitable for qualifying as teams struggled with durability in high temperatures at Silverstone. Renault’s Daniel Ricciardo was third, from Red Bull’s Max Verstappen and Racing Point’s Lance Stroll and Nico Hulkenberg.

The lifetime – or lack of it – of the tyres was the big focus of the day as teams came to grips with a softer tyre selection from Pirelli than at last weekend’s British Grand Prix at the same track. The tyres are all one grade softer this weekend, so last weekend’s ‘soft’ tyre – which was very much not favoured – is the medium this weekend, and the ‘hard’ which was the preferred race tyre last weekend is not supplied this time. The tyre supplied as the ‘soft’ this weekend is the second softest of Pirelli’s range, and it appears unsuited to the demands of Silverstone’s high-speed sweeps on a summer’s day with temperatures of 30C.

Hamilton’s fastest time was set on medium tyres, while Bottas’ was on a soft. Stroll and Hulkenberg also used the medium to set their fastest times.

Earlier Hamilton’s teammate Bottas, who has signed a new deal to stay with Mercedes for 2021, has finished as the quickest man in the opening practice session with a 1:26.166. As normal, Mercedes finished one-two with Lewis Hamilton 0.138 seconds was slower than Bottas to finish second in the first practice race of 70th Anniversary GP  live at Silverstone.

Attention in the first session was focused on the ‘soft’ tyre, after Pirelli’s decision to supply rubber for this race that is one step softer than at last weekend’s British Grand Prix.

F1 70th Anniversary GP LIVE : What are the odds for Hamilton’s win?

Lewis Hamilton is dominating the F1 Season this year like no one else. Hamilton is at record setting spree with 3 out of 4 races already under his belt. Will his domination continue once again at Silverstone tracks as the inaugural 70th Anniversary Grand Prix at Silverstone is scheduled for Sunday in Silverstone, Great Britain