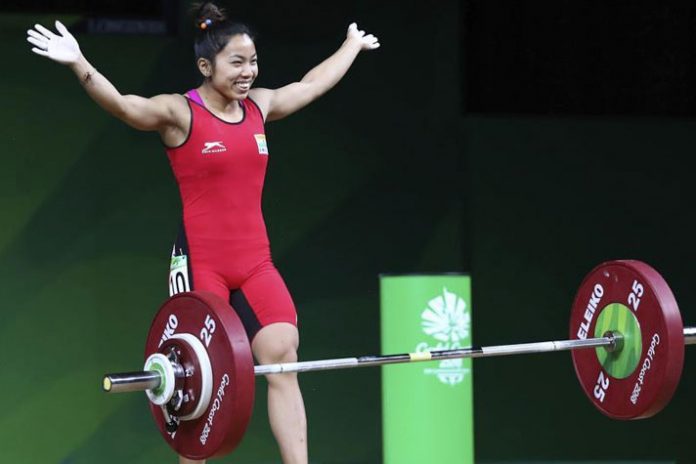 Former world champion Mirabai Chanu will look to put the best foot forward to strengthen her chances of Olympic qualification when she spearheads the Indian challenge at the Asian Weightlifting Championship, starting here Saturday.

India’s brightest medal prospect, Mirabai, who jumped from 48kg to 49 kg following the International Weightlifting Federation‘s (IWF) rejig of weight categories, has made a strong comeback from a lower back injury that kept her out of action for nearly nine months.

In February, the 24-year-old lifted 82 kg in snatch and 110 kg in clean and jerk to clinch the gold medal at the EGAT Cup in Thailand, which was the first of the six Olympic qualifying events for Mirabai.

In order to ensure a spot on the podium here, the Commonwealth Games gold medallist will have to significantly better that performance.

Thai weightlifter Chayuttra Pramongkhol, who is currently embroiled in a dope scandal, had lifted 209kgs (89+120) in the 49kg category to clinch the gold medal at the World Championship in 2018. The remaining medallists — Hou Zhihui and Jiang Huihua of China — lifted 208kg (93+115) and 206kg (92+11 4) respectively. The bronze medal total a whopping 14 kgs more than Mirabai’s 192kg at the EGAT Cup.

However, the diminutive Manipuri is aware of the competition and is working towards at least breaching her personal best of 196kg here.

“Mira’s aim for the Olympics is 210 kgs. In the Asian Championship we aim to go above the 196kg mark,” National coach Vijay Sharma told PTI.

Among male lifters, all hopes will be riding on Youth Olympic Games gold medallist teenager Jeremy Lalrinnunga after two-time Commonwealth Games champion Sathish Sivalingam pulled out of the tournament owing to performance issues.

“Sathish and RV Rahul haven’t traveled to China. They won’t be participating in the Championship because their performance has not been up to mark,” Sharma said.

The 16-year-old from Mizoram has bulked up from 62kg to 67kg to abide by the revised weight categories set by the IWF. Jeremy had won the silver medal in the EGAT Cup lifting 131kg in snatch and 157kg in clean and jerk and would be again eyeing a podium finish.

While none of the athletes will be able to qualify for the Olympics from this tournament alone, a good performance at the gold level Olympic qualifying event will bolster their chances of making it to the Tokyo Games next year.

“Our aim is to keep improving our total at every event we participate,” Sharma said.

The qualification process for the 2020 Olympics is based on the performances of the weightlifters in six events over a period of 18 months, out of which the four best results logged by a lifter will be considered.

Every athlete also needs to participate in at least one gold level and either one gold level or one silver level event during the one-and-a-half year’s time-frame.