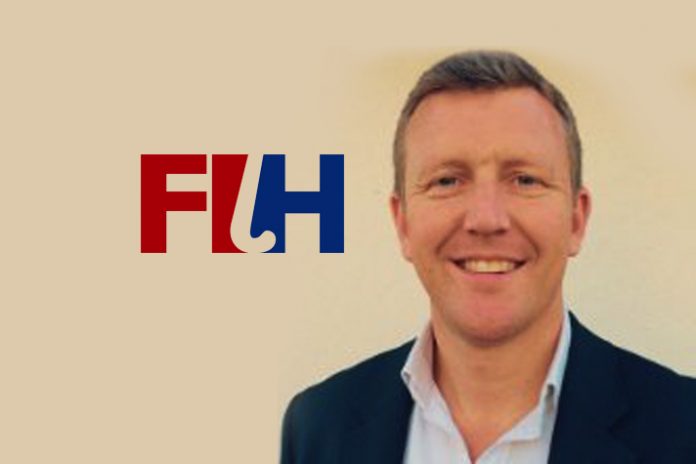 The International Hockey Federation has announced the appointment of Jon Wyatt as Sport and Development Director, who will take up his position in the FIH Headquarters in Lausanne, Switzerland in April 2018.

The Olympian had earned 195 caps for England and Great Britain during a successful career in which he captained both teams.

Jon participated in the Atlanta 1996 Olympics before captaining Great Britain at the Sydney 2000 Games. He also took part in two World Cups (Utrecht 1998 and Kuala Lumpur 2002), four Hockey Champions Trophies (Berlin 1995, Brisbane 1999, Amstelveen 2000 and Rotterdam 2001), two European Championships, winning a bronze medal on both occasions (Dublin 1995 and Padova 1999) and two Commonwealth Games, in Kuala Lumpur in 1998 where he won bronze, and in Manchester in 2002. At club level, he also captained Reading Hockey Club to a European Club Champions Cup victory in 2003.

Following his career as an athlete, he joined Lighthouse Communications who were then acquired by sports marketing agency Fast Track, and subsequently CSM. As Managing Director of Fast Track, he led a team of 50 in the London office and was responsible for implementing their global strategy overseas. He also managed the development and roll out of Fast Track’s client servicing and account management strategy.

During this time, Jon gained extensive experience in sports marketing, working with brands and sporting bodies in the build-up to, and during, the London 2012 Olympic Games and the 2015 Rugby World Cup, as well as with the English Premier League and the British & Irish Lions tour of Australia in 2013. He is leaving his current role as Commercial Director of the Event Rider Masters, an Olympic level international equestrian series. There he was responsible for contracting events and venues, centralizing commercial rights, promoting them through digital and linear TV platforms and commercializing them by bringing in international brands as sponsors.

In addition to his business commitments, Jon devotes time to charitable causes. He is an Ambassador for Access Sport, a UK based charity providing sporting facilities and inspiration for children. He has also taken on a number of fundraising activities which have included climbing Mount Kilimanjaro as well as participating in the London Marathon, London Triathlon, and Etape du Tour.

Speaking about his appointment, FIH CEO Jason McCracken said: “We’re delighted that Jon will be joining the FIH team next year. He has proven to be a commercially astute leader and manager of people, whose strategic thinking will be of great value to the organisation and the development of the sport.

“With his experience captaining national teams in major competitions, combined with his business knowledge gained over the past 20 years working with brands, rights holders and governing bodies, Jon brings both an expert understanding of hockey and the skills required to push our sport to the next level. He will, therefore, be a crucial component within our Hockey Revolution strategy which aims to make hockey a global game that inspires the next generation.”

Speaking about his move to the FIH, Jon said: “I am delighted to be given the opportunity to join the FIH at this incredibly exciting time for the sport. Not many people have the chance to combine their passion for the sport they love with the professional skills they have developed. I’m really looking forward to starting next year and helping grow hockey across the world at all levels.”

Jon replaces former national team-mate David Luckes who is moving to the International Olympic Committee to take on the role of Head of Summer Olympic Sports and International Federation Relations.