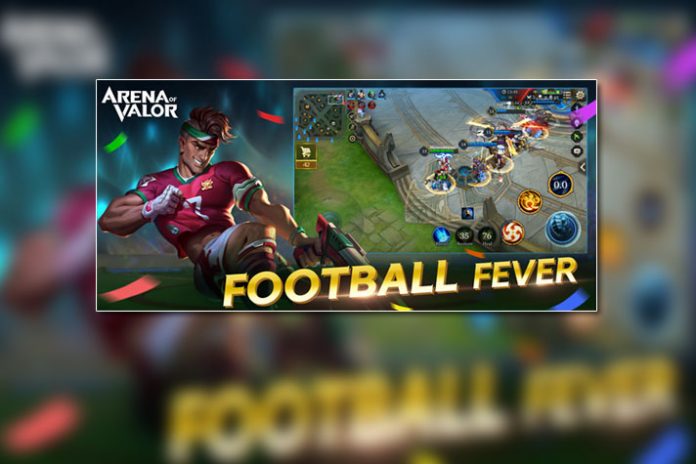 Arena of Valor, one of the most popular MOBA games (multiplayer online battle arena) by Tencent Games, has launched an all-new game mode — Football Fever –  to leverage from the peaking frenzy of the ongoing FIFA World Cup 2018 in Russia.

Within a few months of being launched in India, Arena of Valor is all set with a new update – “Football Fever” – for the gamers. Instead of destroying towers and killing minions, players will instead take to the pitch in a three-on-three soccer match where attacking the ball sends it towards the goal.

According to Aneesh Aravind, General Manager, Tencent Games India, “If you are a fervent Football fan then AOV’s Football Fever, is going to leave you in a fever pitch. The best part —You can celebrate the World Cup by playing with your favorite heroes in quick 4-minute matches. We are very excited about this new game mode and am sure that our AOV Fans in India will enjoy these world cup themed matches alongside their AOV heroes on a football field.”

Football Fever combines football and MOBA and creates an all new gameplay suited for both MOBA and football enthusiasts. The game mode also features a unique set of skills, exclusive to this mode. You can experience the thrill of a football match and the intensity of a MOBA game, both at the same time, states the official release from Tencent.

All set to launch on July 5th, this update will also be introducing a new hero, Tulen in the game along with a new football fever themed skin. Apart from that, existing heroes like Xeniel, Murad, Valhein, and Max, users will also be treated to new skins with the same theme.

Since its launch in China in 2015, Arena of Valor has experienced immense growth and now boasts of more than 200 million monthly active players, making it one of the most popular mobile games in the world. This immensely popular game has 500,000 downloads according to the Google Play Store till date. AOV recently concluded their AOV Summer Tournament. The overall prize pool was ₹5,20,000. The winner took home ₹2,00,000 of the total prize pool.

Arena of Valor is among the six esports titles including League of Legends, Hearthstone, Pro Evolution Soccer and Starcraft II and Clash Royale – that will feature in the esports roster of the upcoming 2018 Asian Games at Jakarta and Palembang. The announcement was made by the Asian Esports Federation in May.

PES, League of Legends among 6 Esports events for Asian Games 2018