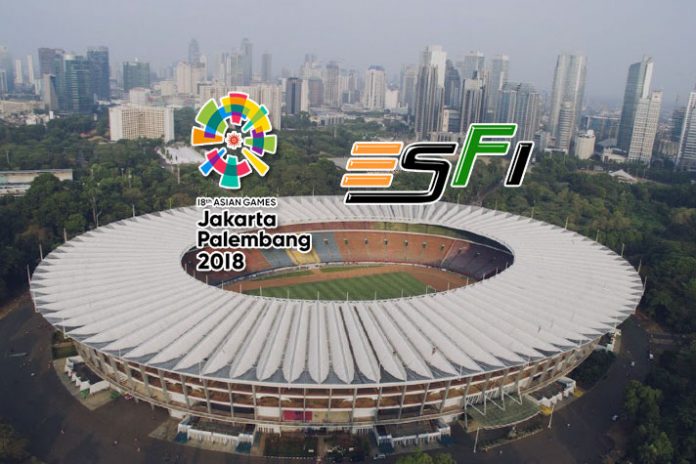 Ten Indian players have attained the qualifying mark for the Esports’ competition at the 2018 Asian Games in Jakarta and Palembang. However, their participation will be subject to an Indian Olympic Association (IOA) nod.

Esports Federation of India (ESFI) has announced five teams to represent the country in the upcoming Asian Games 2018 in Jakarta and Palembang, Indonesia. This will be the first time that esports will be added to a multi-sport quadrennial tournament.

The games are slated from 18 August to 2 September 2018 in Jakarta and Palembang, Indonesia.

The Esports event will be organized by Asian Esports Federation (AESF) in the 18th edition of the Asian Games as a demonstration sport. The governing body of Esports in Asia had confirmed six titles in May – the League of Legends, Hearthstone, Pro Evolution Soccer and Starcraft II, Clash Royale and Arena of Valor – to be included in the Esports roster of the Asian Games 2018.

PES, League of Legends among 6 Esports events for Asian Games 2018

Is esports on the verge of becoming an Olympic reality?

Indian Esports Athletes have qualified in four game titles for the main event at Asian Games 2018, after winning the South Asian Qualifiers. ESFI had sent teams for 5 game titles (Clash Royale, Hearthstone, Pro Evolution Soccer, Arena of Valor and League of Legends), which were identified after the India Qualifiers.

Except for the League of Legends team, a total of 10 Indian esports athletes representing four teams have qualified for the main demonstration event.

Karan Manganani, who won against Teams from Maldives, Sri Lanka and Pakistan, will represent India in Clash Royale team. All the Indian teams have scored the highest in the points tally to secure their berths in the esports demonstration event at the Asian Games.

The Arena of Valor (AOV) team consisting of Tanmay Kumar, Abhineel Bajoria, Giridhar K Sajeev, Ahamed Junaid, Harsh Maan and Vishwajeet Singh Tomar got lucky with a direct entry to the main demonstration event since they were the only team from South Asia.

The above winners will go for the main event at Jakarta subject to Indian Olympic Association (IOA) nod. IOA, yesterday, named a 524- member strong Indian contingent for the Asian Games featuring 277 men and 247 women athletes from a total of 36 sports disciplines.

Other countries who qualified from South Asia for the main esports demonstration event are Sri Lanka (Starcraft) and Pakistan (League of Legends).