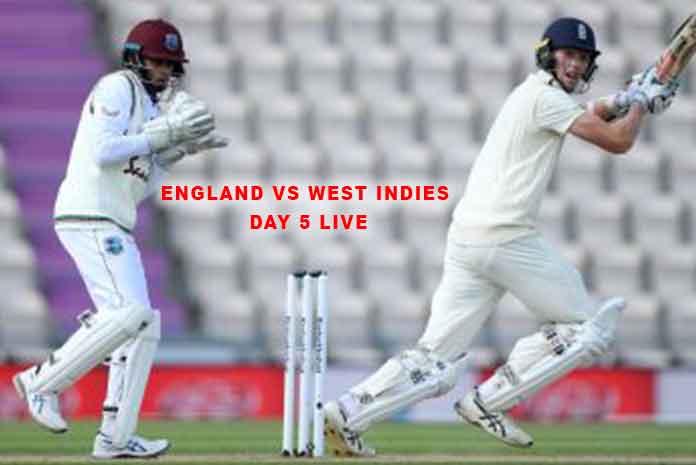 West Indies limited-overs all-rounder Carlos Brathwaite: “West Indies have their noses in front. They will sleep sweeter tonight than the England team would.

“I think 200 seems to be the target. Any less than that, West Indies will be happy. If not, England will feel like they have a chance. It’s just going to be a riveting last day of Test cricket.”

With this win, West Indies takes a 1-0 lead in the three-match #raisethebat Test series.

?Stat Alert?
West Indies is the only away team to chase a target of 200+ twice in England in this century??????#WIReady #ENGvWI #MenInMaroon pic.twitter.com/yCkqfao244

Dwayne Bravo, who missed out the tour due to Covid-19 also extended his wishes to the winning skipper Jason Holder and coach Phil Simmons

A major setback for Windies late into the game as a well-settled Blackwood returns to pavilion for 95. FOW-189/6

A mix-up between Holder and Blackwood but no harm done. Holder wanted the single, Blackwood didn’t , in the end the latter had to give in to the captain’s demands. He had just made his ground.

It's not over just yet…

Stokes has Dowrich caught behind! ☝️

Stokes brings himself on. Dowrich gets and edge and the catch is taken at slip. But another anti-climax! Replays show Stokes bowled a no ball.

Not Out says the tv umpire. Missing leg stump. Blackwood gets to continue the chase with Dowrich#WIReady #ENGvWI #MenInMaroon pic.twitter.com/HZ98tjA4tD

Good pace from Mark Wood. Blackwood shows the first sign of disrespect and late in-swing almost makes him regret that. An lbw shout against him.

A little more than 40 overs are left in this match. England need 6 wickets. Archer has got 3 already, can he get a few early strikes?

☕️ time! 108 runs in the session after lunch for the loss of 1 wicket. Blackwood and Dowrich will continue the chase of the remaining 57 runs with 6 wickets in hand#WIReady #ENGvWI #MenInMaroon pic.twitter.com/IcdGoe2zqv

Blackwood, in total control now.No other English bowler have come close to having an impact like Archer in this innings. WI 138/4, need 62 more to win

The Barbadian brings up his half-century with a boundary.

50 for Jermaine Blackwood ??????
His 11th Test half-century. Giving WI a fighting chance with Dowrich at the other end #WIReady #ENGvWI #MenInMaroon pic.twitter.com/cNVJOxim5o

7.43pm
Check out the cracking delivery from Jofra here

Jof makes it happen! What a delivery! ?

?is up!!! 100 more to go as 200 is the target. Chase and Blackwood rebuilding the innings after the loss of 3 early wickets.#WIReady #ENGvWI #MenInMaroon pic.twitter.com/VeeL3w7N4H

That is drinks! West Indies have regained their composure and it’s the home side under the pump.

Big Miss! Run out chance! Crawley, the 21-year-old fumbles in collecting the ball and England throw another huge chance away! Both batsmen were running towards the same end but they had time to recover as the fielder fumbled.

Batsmen keep pushing the tempo. Singles being converted into doubles. The England fielders being put under pressure after Lunch. Stokes and Archer are firing them in, West Indies batsmen not falling into the trap. They are giving the good balls respect and finding the gaps whenever they get the loose balls. WI 83/3, need 117 more to win

On the two occasions when a Test in Southampton went to the fourth innings, the team batting last could not reach 200 ? #ENGvWI pic.twitter.com/5o1gDO8Wh3

6.27pm
Blackwood living on the edge

Bess is getting a decent amount of turn on this Day 5 pitch. Blackwood is getting all cramped up against the spinner. Blackwood survives narrowly off the last ball! WI-45/3

6.10pm
We are back from the lunch break
Afternoon session ensues!

West Indies need 165 to win. England need 7 wickets. 73 overs still scheduled for the day. Who will come up with the bigger hearts?

West Indies are effectively 4 down at the moment with John Campbell having hobbled off after getting hit on the toe by an Archer yorker.

West Indies have never lost a Test chasing 200 in the fourth innings. That could change today if the morning shows the day on Day 5.

Windies have never lost a Test while chasing 200 or below. Can @JofraArcher change that? ?#ENGvWIpic.twitter.com/ohUA1nJrhi

Archer has his second as Shamarh Brooks is hit bang in front. West Indies 7-2, need another 193 to win.

A brilliant start! @JofraArcher gets his reward! ?

An early breakthrough for England. A length ball that swerves into the corridor as Brathwaite plays it off the inside half of the bat. FOW-7/1

Windies batsmen take the crease as James Anderson bowls a maiden first over.

England are all out for 313, setting West Indies 200 to win ? #ENGvWI SCORECARD ▶️ https://t.co/J9IrapSl4x pic.twitter.com/p9MC7etzQP

Mark Wood falls after nicking Gabriel’s delivery behind to the keeper. FOW-303/9

Shannon Gabriel now has 4️⃣ in the innings, and 8️⃣ in the match ? #ENGvWI pic.twitter.com/QTCxcU3Y2e

Aggression from Archer. He got beaten by Holder in the previous ball and now decides to give himself room and slam it past mid-off for his second boundary of the morning.

How many more runs do you think they can add?#ENGvWI pic.twitter.com/DrmeiLZfvI

Alzarri Joseph lines up to bowl the first over on Day 5 opposite Mark Wood.

England will resume Day 5 at 284/8, with a lead of 170 runs. Mark Wood will be on strike accompanied by Jofra Archer at the other end. The hosts will be aiming for a lead of 250+ to give themselves a fighting chance of winning the fixture.

The players are getting done with their final preparations. A heart-thumping Day 5 in the offing!

Check out all the happening from Day 4 here.

Here's what happened on Day 4 in Southampton.

Hello and welcome to the Day 5 live coverage. We are exactly one hour away from start. All three outcomes are possible today. Stay tuned.

After a gripping day of Test cricket on Day 4, we are back with the final day. England 284 for 8 at the end of the day, leading by 170. They’ll look to stretch that as much as they can. Last night saw both sides having their moments, as the day ended evenly poised. West Indies’ big pacers will want to wrap it up quickly. Same way as they took five wickets in the final 75 minutes of the fourth day to leave them on top in an enthralling Test match at the Ageas Bowl.

It will be interesting to watch the battle between England batsman vs West Indies pace battery on Day 5. A superb finish awaits on the final day.

(Keep following this space for all the live and exclusive updates)