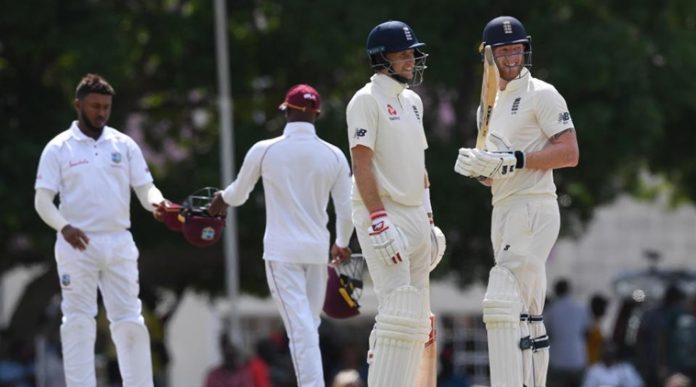 The second Test in Manchester got underway, after a slight delay in start as rain played spoilsport. Dom Sibley shouldered the English hopes on Day 1 in Old Trafford as the Lions finished with 207/3 on the scoreboard.

England made a steady start, but Holder’s attempt to experiment with spin paid off as Roston Chase struck right at the stroke of lunch.

After claiming Rory Burns before lunch, Chase continued his magic to claim the wicket of Zak Crawley, on the first ball after play resumed.

After the double strike from the Windies spinner, England skipper Joe Root did his best to weather the storm.

The Lion skipper could only manage a score of 23 before Caribbean quick Alzarri Joseph sent him back to the hut.

However, Dom Sibley played the role of an anchor, forming consistent partnerships to keep the visitors’ pace-laden attack at bay. England reached the Tea break at 112/3, with Sibley continuing to hold one end up.

Ben Stokes joined in the party with a deft half-century as he finished Day 1 on 59*.

The partnership between Stokes and Sibley is England’s first-century stand for the fourth wicket in last 25 innings and highest fourth-wicket stand since Root and Malan put together 133 at SCG in Jan 2018 Ashes.