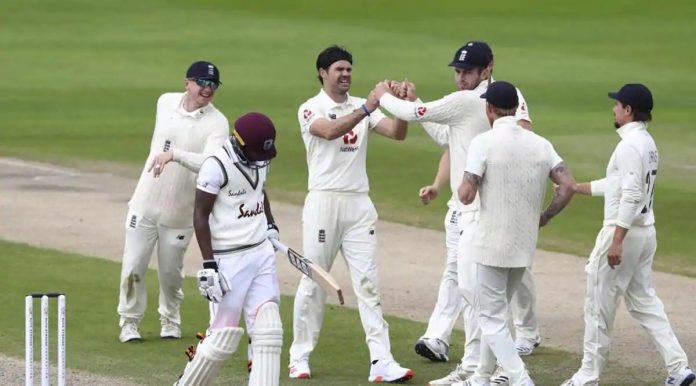 England continued their home streak of 32 years against the West Indies after scripting a comeback to reclaim the Wisden Trophy after eclipsing the visitors 2-1. England sealed the deciding #raisethebat Test in Manchester by 269 runs as the Windies were dismissed for 129 in their 2nd innings.

Stuart Broad was the star of England’s win, who put up a stellar display after being dropped in the first Test in Southampton which the Three Lions lost. Broad finished the final Test with figures of 10/67 after taking 6 wickets in the first innings and 4 in the second.

The right-arm pacer also gave a testament of his lofty repute, achieving a historic milestone of 500 wickets to join an elite list of cricketers. Broad on Day 2 had picked two wickets and on day three he added six more, taking his tally to 8 wickets before claiming his 500 Test wickets today afternoon.

The pace trio of Broad-Woakes-Anderson proved lethal for the West Indies batsmen as they absolutely decimated through the lineup. Chris Woakes too played a clinical part, taking a 5-wicket haul in the second innings.

Earlier, during the Day 2, Anderson also entered the record books to become the highest wicket-taking English bowler against West Indies. Apart from the feat, he also joined the ranks of Kapil Dev and McGrath, who has 110 and 89 scalps respectively. Anderson currently stands third in the list with 87 wickets followed closely by Truman who has 86 wickets to his name.

It would also be only the second time any bowling pair would cross the historic milestone. Previously, the Australian bowling duo of Shane Warne and Glen McGrath has achieved the feat in