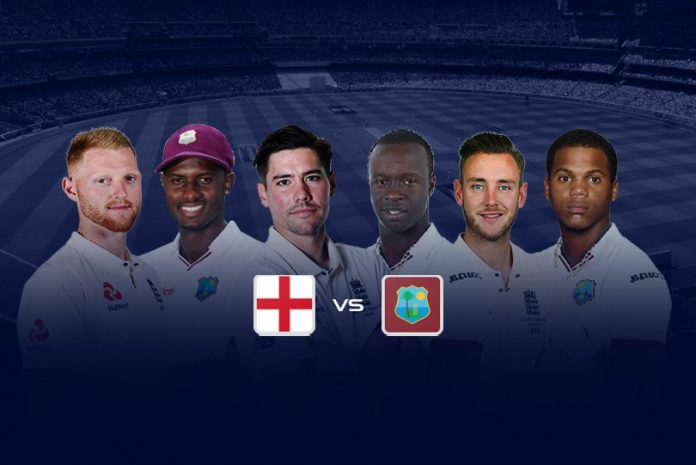 England vs West Indies 1st Test Match Live starts from 8th July – 12th July on Wednesday at 3:30 pm. Cricket is set to resume after a long pause with the much anticipated West Indies tour of England. It is going to be a clash of two heavyweights, when England host West Indies in the first #raisethebat Test match in Southampton, starting from July 8.

Speaking about the high-octane fixture, let’s take a look at the top 5 key player battles that fans can expect to witness.

This is dubbed to be one of the fiercest rivalries on the pitch when the two teams lock horns. The charismatic Ben Stokes, in his 63 Tests has scored 4056 runs at an average of 36.56, including nine tons and 21 half-centuries. He has a highest individual score Test cricket is 258. In the bowling department, he has scalped 147 wickets at an average of 32.68 with six for 22 his best bowling figures in an inning.

Shai Hope’s twin hundreds against England in the 2017 Headingley Test is a testament of his immaculate technique and the potential threat he can possess to the English bowlers.

Meanwhile, England seamer James Anderson has already given a gist of his hostile bowling through his training sessions. It will be interesting to see how Hope deals with Anderson’s out-swingers in testing conditions.

West Indies batsman Kraigg Brathwaite has risen to prominence in the latter half of his career, owing to impactful knocks. In Brathwaite, West Indies have found a solid opener, studded with a sound composure.

Notwithstanding, Jofra Archer’s express pace could perturb his plight early on. Archer will be raring to dazzle the red cherry on the vicious England decks.

Over the years, Broad has been successful against the left-handers, bowling around the wicket. His success against David Warner in The Ashes was a classic example.

He will constantly be in quest of the stray outside edge throughout. In this case, he becomes a potential threat for the West Indian opener John Campbell. Paradoxically, the left-handed batsman could also display an attacking approach.

Kemar Roach is probably the fastest bowler in the West Indies squad presently. Known for his aggression, Roach will be aiming to destroy England’s top order with his pace.

Opening batsman Rory Burns, who is making a comeback for England, could find it difficult to face the West Indian pace spearhead. However, his robust technique may also give Roach a run for the money.