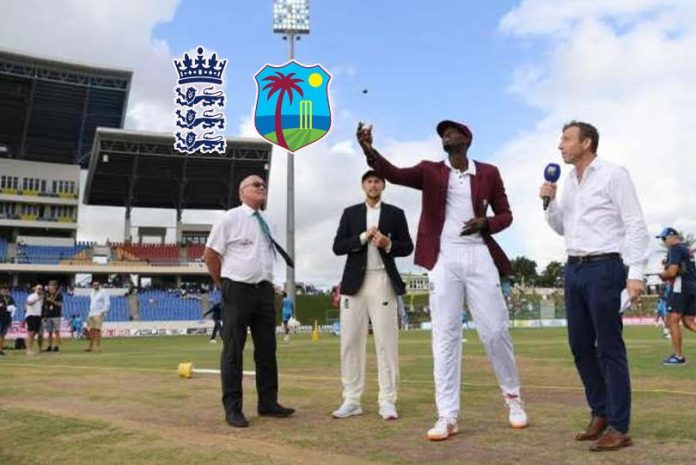 That’s it folks for today. Stumps in Southampton. Bad light has forced an early end to the second day. Do come back tomorrow for more thrills and spills. Until then, goodbye and cheers!

We have some bad news! The umpires have stopped the play as the light seemed to be fading. WI-57/1 after 19.3 overs

West Indies trail England by 147 at @theageasbowl – Campbell (28) the only man to fall so far in the innings ?️#raisethebat #️⃣ #ENGvWI

9.53pm
Anderson gets the first break!

The English veteran used his experience to claim John Campbell who was looking well settled. With this wicket, Anderson broke the 43 runs partnership which was building up to be dangerous.WI-43/1 after 13 overs

James Anderson has made the breakthrough!

John Campbell has been trapped leg-before, and West Indies are 43/1.#ENGvWI pic.twitter.com/023l37ZQ2q

The light has improved already, as the players are being signalled back on to the pitch

Bad light has momentarily stopped play. WI batsmen will no doubt be anxiously waiting to go back out in the innings chase.

Kraigg Brathwaite and John Campbell walk out to bat for the visitors; 47 overs still to be played today. Promises to be another fun and intense session.

8.40pm
This is how the scoreboard looks at the end of the first innings

Stay tuned as we will be back shortly for WI’s response.

INNINGS BREAK: Tea taken early, as the #MenInMaroon bowl out England for 204! ???

Jason Holder held the ball aloft as he led his WI side off the field. Six wickets and some excellent reviews to boot. Both Holder and Gabriel were injury concerns for the visitors ahead of this Test, but they’ve stepped up brilliantly to share the ten wickets between them. Bess’ cameo has hauled England past 200. The pitch still has something for the bowlers, and England’s quicks will fancy bowling on this.

8.20pm
Gabriel puts the final nail in the coffin!

Shannon Gabriel picked up his fourth wicket to wrap up England’s innings.
ENG: 204 All out

Career-best figures now for Holder in Tests as he has 6-34 with the wicket of Wood (5), edged to gully.

Another West Indies review for lbw, after Holder speared one into Archer’s front pad. Richard Kettleborough declined the original appeal but the review show the delivery looks to be troubling leg stump.

Jason Holder gets his 4th wicket! Jos Butler too falls prey to the Windies skipper after he took the scalp of the Lions skipper Ben Stokes in his previous over. Butler and Stokes provided a 67 run partnership to steady England’s chances in the match. Enter Jofra Archer. ENG:157/7 after 56 overs.

Buttler edges behind and the Windies captain is on the verge of a five-for!#ENGvWI pic.twitter.com/8dNbNb40l2

7.17pm
Check out the scintillating delivery

Huge wicket for the tourists.

Windies skipper Jason Holder gets the better of the Three Lions captain, who departs after making 43. ENG:154/6 after 54 overs

FIFTY partnership between Ben Stokes (36*) & Jos Buttler (23*). This pair is looking dangerous. Ben Stokes’ defence has really tightened up in recent years. Buttler has played some delightful strokes in this compact innings so far.

Ben Stokes and Jos Buttler are fighting back for England and have brought up the 5️⃣0️⃣ partnership ? #ENGvWI SCORECARD ▶️ https://t.co/J9IrapSl4x pic.twitter.com/wYP7CcmEgp

Ben Stokes living on the edge as he is dropped for the second time, this time on 32 by Brooks.

Players just coming out now to limber up, conditions looking distinctly parky out there. Tea will now shift to 9.40pm IST (4.10pm local time) and will witness a  slightly extended session, with a provision to play until 7.14pm to get the overs in.

Back out after a slight delay from lunch.
And it’s the wicket man Shannon Gabriel to open the attack#ENGvWI #raisethebat pic.twitter.com/Cn8yO5g0VY

Disappointing news from the middle as it is very gloomy around the ground. Looks like there has been a bit of drizzle but hopefully, we will be back soon.

It’s 1pm local time as the umpires signs for lunch. West Indies’ pace pack, led by Holder and Gabriel, exploited the conditions – both overhead and underfoot. As it stands, England are 106 for 5. Can Stokes flip the script after lunch?

Skipper Ben Stokes and vice-captain Jos Butler at the crease currently as they try to make amends for their side’s horror show today morning. (ENG-100/5 after 42 overs; Stokes 20*,Butler 4*)

5.25pm
DROPPED!
Stokes DROPPED on 14! Short ball to Stokes and he can’t resist a pull and gets horribly cramped, comes off the top part of the bat and Roach gets there in plenty of time at long-leg, gets both hands to it and lets it slip!

Ollie Pope sent back to the pavilion for just 12 as the England top order is folding like a pack of cards. It has been an incredible morning session on Day 2 for the visitors as they claimed three quick wickets. ENG 87/5 after 38 overs. 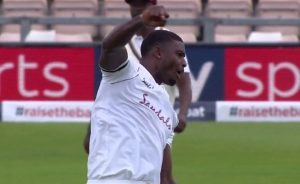 The West Indies pace attack are driving past a blizzard against the English batsmen. Zak Crawley victim this time to Windies skipper Jason Holder.ENG- 73/4 after 35 overs(Crawley 10 lbw Holder).

Another wicket for Windies ?

Round the wicket and Gabriel hits the pads! Originally the umpire thought it was sliding down leg or maybe that there had been some bat. Excellent review and Gabriel gets his 3rd wicket. ENG- 51/3 after 26 ovs 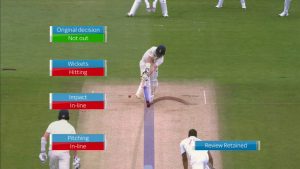 England batsmen seem to headed for a pitfall as Shannon Gabriel has taken the scalp of Rory Burns and his third wicket in the game. ENG-52/3; Rory Burns 30 lbw Gabriel.

Rory Burns has just become the first England opener to score 1,000 Test runs since Alastair Cook reached the milestone against India at The Oval in 2007.

He becomes the 30th England player to pass the tally in the opening spots. pic.twitter.com/MX0Vg4m5ed

It has been an incredible tale so far for the West Indies team, especially Shannon Gabriel. The Caribbean quick, right after going for a bounder splatters the wicket of Joe Denly as he walks back to the pavilion for 18. ENG-48/2

Lights are on again and an orthodox field with three slips and a gully! Joseph’s over is finished and Jason Holder completes the next one. 40 percent chance of rain but the situation is quite good now. Clouds are over the ground but more cricket than yesterday for sure. ENG- 41/1 after 20 overs.

3.30pm
Aaaaaand we are underway!

Out come the umpires, West Indies huddling by the boundary and the England batsmen coming down the pavilion. Joseph Alzarri with two balls left in his over.

Former West Indies skipper Ramnaresh Sarwan shares words of encouragement for the Windies team ahead of the Day 2 start.

Good news from the middle as the sky is clear for now and we are just 15 minutes away from the scheduled start of 3.30pm IST. 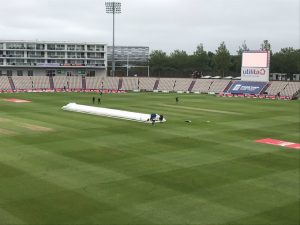 Denly will take the strike against Alzarri Joseph when play resumes, partnered by Burns on the opposite end. Here’s a summary of their brief innings so far. 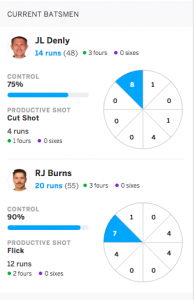 We are exactly one hour away from the start. The weather forecasts show that we will have lengthy dry spells on Day 2, even though clouds will make their presence felt later in the day. There is no rain forecast for the first 5 hours of the day. Some thundershowers are expected later in the day and the evening session could, therefore, have some stoppages.

England vs West Indies 1st Test Match, Day 2 Live starts at 3:30 pm on Thursday. Following a rain-marred Day 1, both teams will be hoping for the weather to improve and get on with the action. While the players took a knee as a mark of tribute to Black Lives Matter (BLM) movement, the match got underway with the new set of ICC guidelines.

A total 100 balls (17.4 overs) were played in 82 minutes on a rain-interrupted Day 1 as cricket fans will look forward for some sunshine in the coming days. Although the start was delayed by light showers, West Indies pacer Shannon Gabriel delivered right on the money to reduce England to 0/1 after just 10 balls as Dom Sibley parted for a duck.

England finished Day 1 with 35 runs on the scoreboard at the loss of one wicket (Dom Sibley).