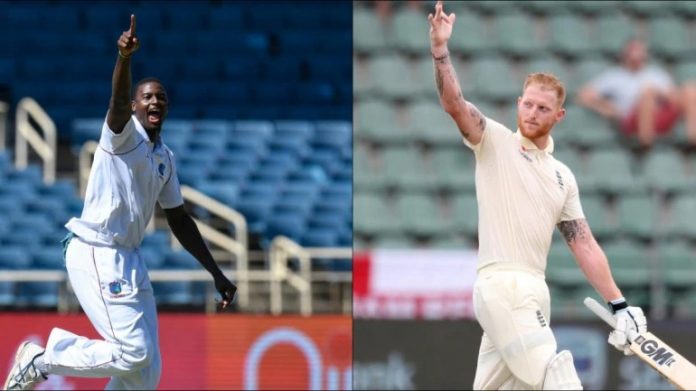 After much anticipation, the first #raisethebat Test got underway as cricket revived following a 117 days-long hiatus. However, cricket fans had to hold on to their seats a little longer as rain played spoil sport and delayed the start.

But soon the clouds parted away to make the historic Test possible. A delayed toss saw England skipper Ben Stokes win it as he opted to bat first. Both teams took a knee prior to the start as Jason Holder was among the ones with his fist raised. A gesture in support of the Black Lives Matter (BLM) movement with logo being sported by both teams on their jerseys.

10 balls into the game and Windies quick Shannon Gabriel stunned, albeit an empty stadium but English opener Dom Sibley most certainly with a cracking delivery. Gabriel angled one on the stumps as Sibley lets it go only to hear the stumps being disturbed. Following Sibley’s golden duck, Rory Burns and Joe Denly cushioned the setback with some neat and deft strokes.

The hosts finished with 35/1 on the scoreboard on a rain-marred Day 1.

The historic encounter also for the first time was played under the new guidelines outlined by the ICC in the wake of the corona pandemic. As per ICC’s new guidelines, cricketers cannot use saliva to shine the ball. ICC has also allowed COVID replacements in case some player is found positive.Not to forget, an extra DRS review will be given to each team in case of an unsuccessful decision from the on-field umpire. This has been done keeping in mind the less experienced umpires officiating in the games as ICC has done away with neutral umpires during corona times.

While a total of 100 balls played in 82 minutes on a rain-interrupted Day 1, cricket fans will be hoping for some sunshine in the coming days.

Toss:England won the toss and decided to bat