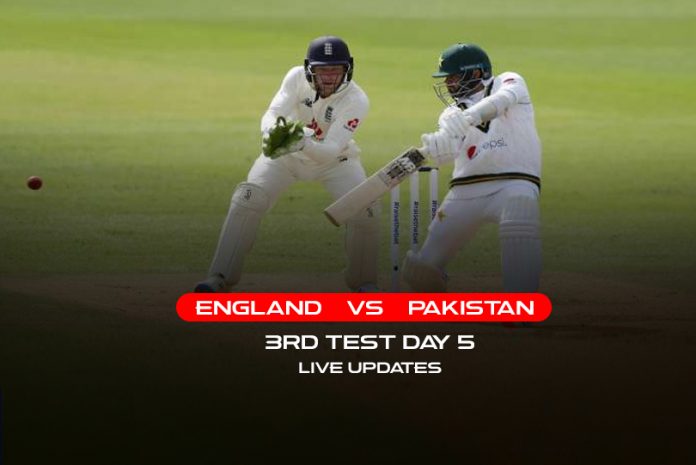 That’s a wrap. Thank you for joining us. See you guys next time.

Babar adds to his boundary tally by whipping Anderson behind square on the leg side and then bags four more in front of square on the off-side as the bowler errs too full.

A wicket for England and it’s Joe Root who has Asad Shafiq out caught at forward short leg. Pakistan. FOW-172/4

10.10pm
Babar not holding back

Pakistan might be playing for a draw but that isn’t stopping Babar Azam from playing his shots. He lofted Joe Root for a couple of boundaries.

10.06pm
Yet another bowling change from Root

A little more than 10 overs left for new balls and Jor Root wants to rush through it.

Looks like Broad and Anderson will be saved for the second new ball and we will get to that point at breakneck speed if Root continues to scoot through his overs this quickly. Pakistan 142/3 after 72 overs

9.30pm
Azam-Shafiq hold fort
Anderson could have added another one

Anderson is not far away from wicket No 601 with a pitched-up delivery snaking past Shafiq’s outside edge as it darts back in a touch to the right-hander. Shafiq rather fishing at that one.

Finally he does it! ?

The landmark scalp comes as Azhar edges through to Root in the cordon after the bowler finds some extra bounce. FOW-112/3

Archer keeping Pakistan on a string as they are unable to score off his in his first two overs of the day. Anderson bowling with him at the other end and is making sure the batsman puts bat on ball. PAK-105/2 after 60 overs.

Another inspection scheduled at 8.15pmIST. The super-soppers have trundled back out to try and deal with a couple of those wet patches. The umpires are having a chat with both teams and the decision could go either way.

The final inspection before the play starts will be at 7:30 PM IST. The umpires have previously decided it’s still too wet and that’s why another inspection is needed.

The run-up covers are being taken off, supersoppers in action.

Next inspection at 1.40pm local time (6.10pm) IST so there will be no play before lunch. Two clear hours and we will be good to go- that’s something to look forward to.

The rain apparently easing at @TheAgeasBowl, but it's still to be a while before any play – confirmed by news of a 1.40pm inspection.#ENGvPAK ????????? #raisethebat #⃣

The groundstaff is predicting that it will take at least a couple hours delay after the rain stops to dry the outfield. Talk about cutting it close!!

Some of the forecasts for this afternoon are looking brighter, so there’s every chance we’ll get on at some stage. James Anderson is also eager to go down to the pitch in pursuit of his #600 Test wickets

A delayed start is expected as it is still quite wet in Southampton. The covers are on, it looks pretty dark.

If Pakistan fails to hold fort, the Men in Green will succumb to their first Test series defeat on English soil after a decade.

The weather forecast suggests there’s a rain forecast in the range of 70% between 10:00 AM and 11:00 AM in Southampton. While in the second half, the weather is to remain mostly cloudy.

Catch all the happenings from the penultimate day of the England vs Pakistan 3rd Test here.

Hello peeps and welcome back the last and final day of the three-Test #raisethebat series. The England vs Pakistan 3rd Test Day 5 is expected to produce some brilliant spells, especially with James Anderson waiting on 599 wickets and hoping to script history by registering the 600 Test wickets milestone.

Stuart Broad (1-23) got the breakthrough as the players returned for an extended final session following a four-hour delay, pinning Masood in front not playing a shot. Anderson later, got Abid Ali, trapping him lbw as Pakistan closed Day 4’s play at 100 for 2 and trailing by 210 runs.