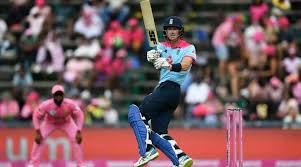 England’s top-order batsman Joe Denly has been ruled out the remainder of the Royal London Series against Ireland after suffering back spasms in training on Wednesday.

The Kent batsman has been replaced in the 14-man England ODI squad by Lancashire’s Liam Livingstone.

Livingstone has represented England in two IT20s and would make his ODI debut if selected in one of the final two matches with Ireland.

Earlier, defending world champions England lived up to their lofty repute, registering an emphatic win against Ireland in the Royal London series opener in Southampton. The Eoin Morgan-led side secured a comprehensive six-wickets victory to eclipse Ireland, and take a 1-0 lead in the three-match series.

Ireland, despite the loss, had glimpses of positives and will be aiming to capitalise on those to try and win the second fixture in a bid to level terms in the three-match Royal London Series, being played in Southampton.