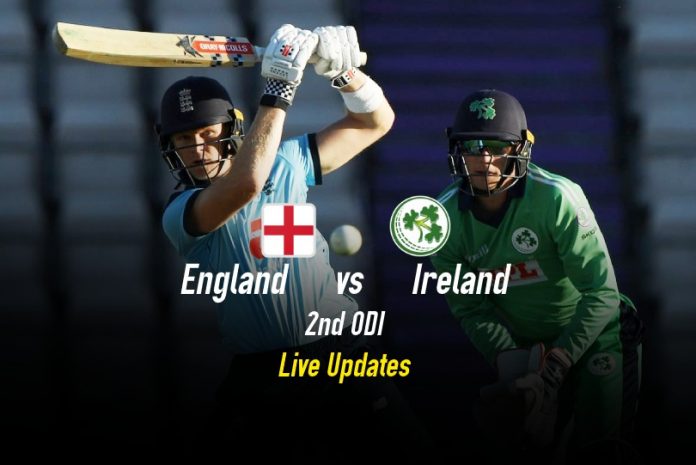 Thank you guys for joining us. Hope you liked the coverage. Keep following us for all the live and exclusive coverage from the world of sports!

Willey finishes off things in style with a boundary. England wins the match by 4 wickets and with that, secures the Royal London series.

SIX! Willey is once again presented with a short ball on leg stump and once again he pulls it into the stands.

12.43am
50 partnership for Sam Billings-David Willey

Willey and Billings are putting on the match-winning partnership here. 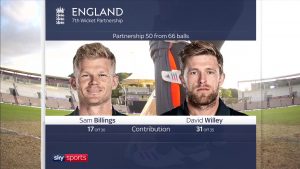 A nerve-calming fifty partnership for England ?

Can these two take us to victory? 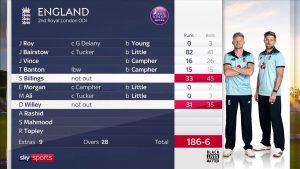 Some pressure is released as Wiley pulls the last ball of the 22nd over for a six over fine leg. That is the first boundary in three overs. ENG 167/6 after 23, need 46 to win

11.56pm
Sixth wicket down for England!
Third wicket for Little!

The captain was out for a duck and so is the vice-captain, skying a pull high into the sky and, ultimately, into Tucker’s gloves as Little bangs in a bumper. FOW-137/6

England skipper Eoin Morgan falls for no score, cutting to cover. You cannot keep Campher out of the action.FOW-137/5

Another wicket for Little ?

Morgan is gone for a duck and England are 5️⃣ down ? #ENGvIRE pic.twitter.com/mJ9oGTVncp

Bairstow’s blistering innings is over as he slashes Little behind off an edge after attempting to clobber another boundary. Out 41st ball. Sixteen of which went for either four or six. FOW-131/4

England reached the 100 mark in 12.4 overs – that’s their 13th fastest hundred ever in ODI cricket. Seven of the scores above it have come since the 2015 World Cup.

Two fifties in a row and now the wicket of Banton in back-to-back ODIs. 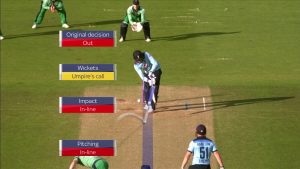 Campher flattens James Vince’s middle stump with a ball that nips back. Brilliant from the Ireland all-rounder. 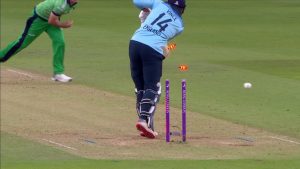 11pm
50 up for England!
Brings up fifty partnership between Bairstow-Vince!
First six of the innings! 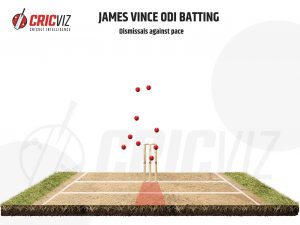 10.50pm
Bairstow scoring runs at will!

Bairstow carries on in the 3rd over too. Cracks it over midwicket for four as Craig Young steams in with hope again. Cracks another four to deep square leg later in the over. And ends the over with another four on the leg side. Bairstow on 23 off 12! ENG 25/1 after 3 overs.

Josh Little starts from the other end. Jonny Bairstow slaps the ball over the in-field for the first boundary of the innings. He goes again, gets an inside edge that just misses the stumps but wrong-foots Tucker behind the stumps, four more!

What a start from @jbairstow21 ?

Ireland strikes early as Jason Roy is sent packing for a duck! FOW-0/1

Jason Roy is gone for a duck! ?

Jason Roy and Jonny Bairstow striding out with England needing 213 to win and clinch the series. 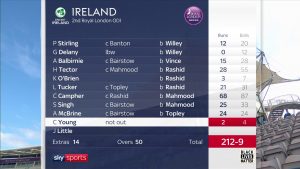 An excellent 50th over from Topley. Ireland end at 212/9, with McBrine falling for 24 off the last ball, Bairstow taking the catch without problem. England need 213 to win.

Another brilliant half-century from Curtis Campher and some useful cameos from Simi Singh and Andy McBrine. #ENGvIRE | #BackingGreen ☘️ pic.twitter.com/ulbliYS118

Topley finally gets the wicket he deserved off the final ball of the innings, with McBrine unable to pick another slower ball and gloving it through to Bairstow.

Reece Topley strikes with the last ball of the innings ?

9.54pm
Campher dismissed for the first time in international cricket

Campher-McBrine bring up their 50 partnership; second of the day for Ireland.

5️⃣0️⃣ partnership between Campher and McBrine in just 5.5 overs ?

Three fours off the 47th over now!

Back to back half-centuries for the young Curtis Campher. Campher works Topley outside off stump all the way to the square leg boundary and bring up his second successive 50 in this series.

Curtis Campher, who made his debut in the last match and looked in sublime form has once again delivered for Ireland, playing a steely knock and holding fort from one end.

Singh, who has just glanced Mahmood for four, tries to run the next one towards the third man and gets a thin edge into the keeper’s gloves. FOW-151/7

Bairstow’s enthusiasm costs England their last remaining review here – Campher fishes outside off stump at Mahmood and the wicketkeeper yells in excitement for caught behind. 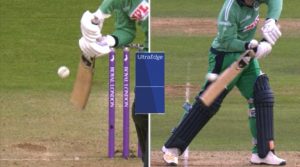 The pair has held fort and are looking strong currently; the English bowlers in pursuit for a breakthrough. After 40 overs; IRE-145/6

Adil Rashid’s economy has been 3.4rpo today – that’s his sixth-lowest in ODIs. His first and second-lowest also came against Ireland.

That is 150 ODI wickets now for Rashid at an average just below 31. 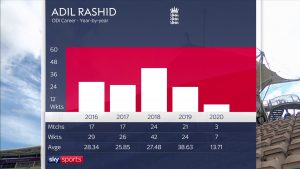 8.25pm
Wicket No.6 goes down for Ireland

Another tame exit for an Ireland batsman. Tucker looking to sweep from outside off but only ballooning up into the grateful hands of Topley behind square on the leg-side. England rampant. FOW-91/6 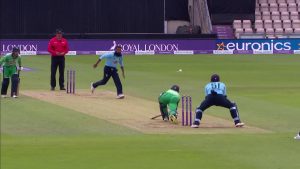 8.10pm
Ireland lose half their side

Tector skips down the track but lacks for elevation and distance as he picks out mid-on. England bang on top in this game. FOW-78/5

Adil Rashid’s record against Ireland is better than against almost any other side. 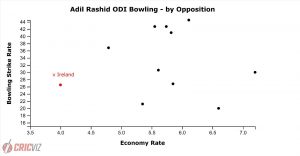 Rashid scoots through another over. Ireland may be picking Vince now but they are not having so much joy against Rashid, whose variation from leg-break to googly is incredibly difficult to detect.

David Millns, the umpire, takes evasive action as Harry Tector goes hard straight down the ground. The umpire just manages to move away in time to not get the full impact of the blow. 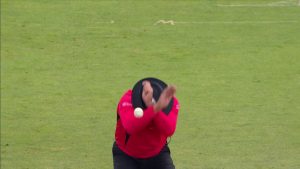 Adil Rashid strikes in his first over, completely deceiving Kevin O’Brien with the googly. It spins back through the gate and crashes into middle. FOW-44/4

Adil Rashid in on the action now ☝️

Balbirnie went for a cut, tried to pull his bat away at the last second but he was too slow and the ball flicked the edge on the way through to Jonny Bairstow. FOW-39/3

Balbrine nails the sweep beautifully. Had to fetch it a tad outside off but the length was right for the shot and Balbirnie used his long arms to good effect to send it crashing into the square leg fence. 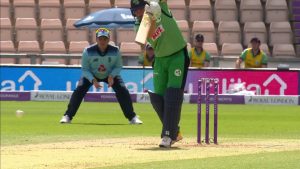 Another quiet over, nicely bowled by Topley and just a single for Balbirnie from it. The Ireland captain is looking more comfortable at the crease than the rest of his side so far today.

Superb catch! Stirling slashes at a wide one, it goes fast but it is in the air and Tom Banton takes an excellent catch at backward point. Willey has another and the dangerous Stirling departs. FOW-15/2

Willey has another one! ?

David Willey is lethal with the new ball and we have seen this wicket from him so many times, swinging the ball back into the right-hander, a little bit of nip off the seam as well and the trapping them plumb in front. Gareth Delany is gone for a duck. FOW-12/1 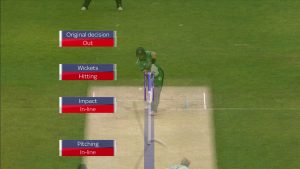 A fantastic moment for Reece Topley as, after years plagued by injury, he runs in to bowl his first ball in international cricket since 2016.

England are trooping out as are the Ireland openers. Willey will take the ball.Players taking the knee before the start.

Josh Little is back in our XI – he made his ODI debut against England last year and took 4-45!#BackingGreen ☘️ ? pic.twitter.com/fLcaEMkycq

David Willey is the king of the new ball in ODIs.

England brings in Reece Topley for his first international appearance since early 2016, he replaces Tom Curran.

We have lost the toss and will bowl! ?#ENGvIRE

We've won the toss and we're going to have a bat first!

Ireland has opted to bat first after winning the toss.

Ireland have won the toss and are going to bat first ☘️ #ENGvIRE pic.twitter.com/D6grCHRNZu

5.58pm
There will be at least one change to the England team for today’s game

Joe Denly has been ruled out of the remainder of the series due to back spasms. He’s replaced in the squad by Liam Livingstone, although it remains to be seen whether the Lancashire batsman will make the XI.

5.48pm
Ireland could try to attack more with spin

We are just 15 minutes away from the toss. Stay tuned to find out the results

England has won the first ODI and taken the lead in Royal London series. A win today will ensure a series win for the Eoin Morgan led sie. Can Ireland fightback and secure a victory in this must-win tie?

England currently leads the three-match Royal London series 1-0 and a win today will ensure the series for them. The Three Lions put up an exemplary display in the opening fixture as David Willey’s five-wicket haul propelled the hosts to a 6 wickets win.

After a bright and sunny day in Southampton on Thursday, there is a chance of a shower or two on Saturday with a 25% precipitation. The minimum and the maximum temperature are expected to be 12 and 23 degree Celsius respectively. The Ageas Bowl track in the first ODI was slow but still decent for batting, although the scores did not depict that.

Ireland, despite the loss, had glimpses of positives and will be aiming to capitalise on those to try and win the must-win tie in a bid to level terms in Royal London Series, being played in Southampton.

The Ashes: Stuart Broad makes huge claim, says ‘It wouldn’t surprise me at all if players pull out’