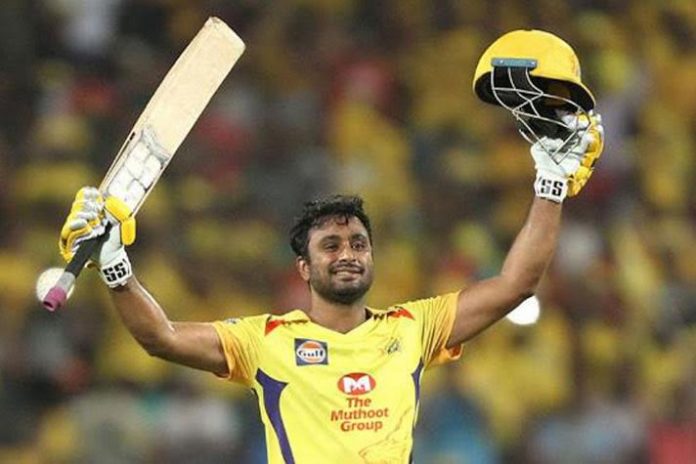 Ambatti Rayudu had missed the bus to England with Team India for failing the Yo-Yo Test. However, that will not stop the Chennai Super Kings batsman from having cricketing summer in England.

Rayudu, in spite of missing his India return narrowly, has not given up the hope of donning the national team jersey. It has been two years, since Rayudu played an International Game for India against Zimbabwe in June 2016. The 32-year-old batsman from Guntur, Andhra Pradesh, remains optimistic of yet another comeback to the national team. “I hope to take the test again in the coming days and hope to clear it,” Rayudu had told PTI.

“Of course, I have not yet given up hope of playing for India. The dream of playing for India very much remains. I have been working on my game,” Rayudu, one of the star performers in Chennai Super Kings’ successful Indian Premier League 2018 campaign.

The India call may take some time. But the Chennai Super Kings batsman is all set to fly to England, where India is engaged in a full cricket tour comprising three T20 Internationals, 3 one-day Internationals and five Test matches.

Rayudu will be in England on duty for his IPL franchisee. CSK has roped in Rayudu as the mentor of the junior Super Kings squad, that will tour England to play in the Junior International Academy tournament.

Rayudu said playing for CSK brought out the best in him and he hoped to do even better next season.

“The franchise made me feel at home. The environment in the team, the warmth of fans, atmosphere and the team management propelled us to give our best. I must thank every player. I am happy that I could experience that feeling. I could express myself. We were in very good space mentally and that really helps. I hope to do better next season,” he said. Now as a mentor of the junior Super Kings team, he wants to pass on his knowledge to the youngsters.

Meanwhile, former BCCI president N Srinivasan said he was sad Rayudu would not be playing in England. “I am sad he is not going to England. I never comment on selection. I never want it to be misunderstood. As a cricket lover, aficionado, I am sad,” he said.

According to CSK CEO K S Viswanathan, the young cricketers of the junior Super Kings who have performed exceptionally well in the district and State level tournaments over the last two years have been selected to take part in the event. “Basically, it is a great opportunity for these youngsters. And CSK has provided that opportunity because we have cricket in our hearts,” he said at the sidelines of announcing the Under-17 team.

“We want to get the youngsters at the grassroots level to come in and play at this level. That is what we want. They also have an opportunity to play at higher levels and also probably play for CSK also,” he said.

The International Junior Academy Tournament, Yorkshire, is scheduled to be held from July 8 to 19.