Eng W vs Ind W: Shafali Verma’s Dad praises her 96 on debut, says, ‘She was trained to play aggressively’

Eng W vs Ind W: Shafali Verma’s Dad praises her 96 on debut, says, ‘She was trained to play aggressively’: Sanjeev Verma, father of India opener Shafali Verma, who scored 96 against England on Thursday, the highest for an Indian debutant in women’s Test cricket, was not surprised with the way his daughter went about the task for he says he had prepared her to play the
aggressive way.

“I am happy with the fact that her runs contributed to India’s total and gave the team a good start. I was quite confident she would do well in the Test,” Verma, who set her on the road to become a hard-hitter, told IANS on Friday.

Referring to Shafali missing a century on debut, he said: “These things happen.

Shafali’s 96 was one run more than what former India captain Rahul Dravid scored on his debut Test innings, also in England in 1996, and Verma felt that the training that she received as a youngster helped him.

Shafali Verma Praises, “I am not surprised because she trained with Ranji Trophy cricketers of the Haryana state. Those guys bowl at 135-140 kmph. At the women’s cricket level, the speed of the deliveries is 100-110 kmph. So, naturally, she would find it easier to face the bowling in women’s cricket. You could see that in the way she faced up to the new ball bowlers,” said Verma, and thanked the Haryana Cricket Association for letting her train with the Ranji team.

“Also the process through which I inculcated six-hitting abilities in her as a child has been helping her all through her career,” he added on Friday while talking of the Rs.10 reward he would keep in a competition between his son and daughter for most sixes.Verma said that Shafali learned to play attacking cricket from an early age.

“One of the things that helped her get into the attacking mould was a drill that we did together. I would pick an odd time, after 11 am or so, and take her and my son Sahil to the ground. I chose odd time to ensure there would be no crowd. Each of us would face six balls and whoever would hit most sixes or fours would get a reward of Rs.5 and sometimes Rs.10,” Verma, who runs a jewellery shop in Rohtak, had told IANS earlier.

Shafali’s two sixes in her first-innings knock made her only the third batter in women’s cricket to hit two sixes in Test innings.

There are only five women batters to have hit two sixes in their Test careers. Three of them — Shafali, Alyssa Healy of Australia, and England’s Lauren Winfield-Hill, who is playing in the one-off Test — have hit two in a Test knock.

Shafali explained it further at the press conference after the second day’s play.

“My brother and I would go and we used to have a competition of who would hit more sixes. And whoever hit more sixes, he would get 10-15 rupees. For those Rs. 10-15 I used to hit sixes. And if I am able to hit well now, I have worked hard on my bighitting, choosing balls to hit,” said the 17-year-old opener. Shafali was, however, disappointed after she holed out to extra cover while trying to heave the ball for a six on the leg-side and
get to the century.

Shafali Verma Praises, “Any batsman, when he gets out in the 90s, he always feels disappointed, I also was disappointed. If you see, I will get great confidence from this innings. Next time I will try to reach 100,” added the opener who set the 2020 T20 World Cup on fire, scoring 163 runs in five matches to end as India’s top scorer and the fifth highest run getter.

“I never count my age when I go out to bat,” she added before explaining her strategy on Thursday’s knock.

“Starting is a bit difficult. I just thought that I should take time. Bowlers were also bowling well, I gave respect to the deliveries.
We thought that if we wait at the wicket, the loose balls will automatically get converted into boundaries. We couldn’t hit full tosses because we were careful early on. We missed a few loose balls,” said Shafali.

Haryana Ranji Trophy team coach Ashwini Kumar had said that her biggest strength is fearless batting.
“At the start when we saw her talent when she was less than 12, we began making her practice with the boys — with the current Ranji Trophy players like medium pacers Ashish Hooda, Sumit Kumar, Ajit Chahal, and off-spinner Amit Rana,” he had said earlier. “She plays fearless cricket and has god-gifted talent. She has good hand-eye coordination. 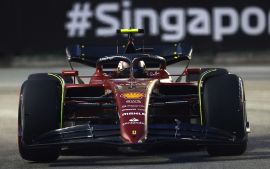