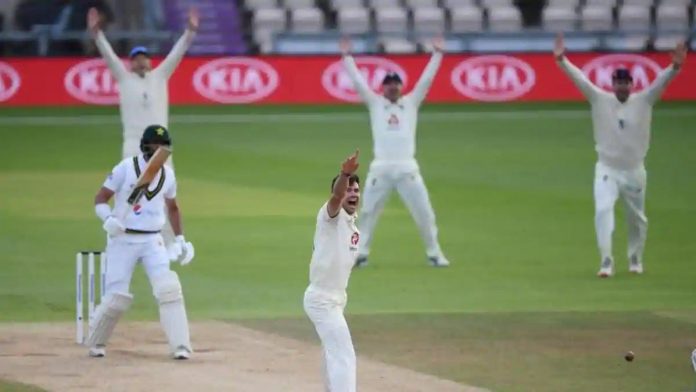 Pakistan, after being enforced follow on will begin their second innings on Day 4, trailing by 310 runs. Azhar Ali, who has scored an unbeaten 141, led the resistance in the first innings, which ended at 273, with James Anderson picking up five wickets. At the start of the second innings, Pakistan trailed England by a further 310 runs, before stumps were drawn due to insufficient light.

Azhar Ali found an ally in Mohammad Rizwan, and the two put on a 138-run partnership. James Anderson picked four Pakistan wickets to fall, closing in on 600 Test scalps. Dom Bess cleaned up Fawad Alam for 21 after that. Azhar Ali led Pakistan’s resistance on Day 3, scoring his first 50 outside Asia since 2018. With Rizwan, Azhar took the visitors to Tea at 158/5. Chris Woakes got Rizwan’s wicket after a 138-run partnership. Stuart Broad then struck twice with the second new ball.

Earlier, Stuart Broad struck with the second new ball for England picking up the seventh Pakistan wicket. After scoring a half-century, Mohammad Rizwan fell to Chris Woakes for 53. Meanwhile, Pakistan captain Azhar Ali scored his 17th Test century – third against England. Together, he and Rizwan added 140 runs for the sixth wicket.