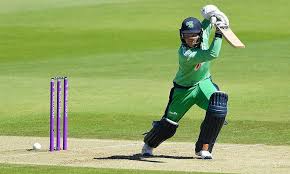 Campher’s cameo of 87-ball 68 once again rescued Ireland, propelling the team’s total to 212/9 from 78/5 in 24 overs and give them a fighting chance in the 2nd ODI in Southampton. However, it wasn’t enough as the defending world champions England lived up to their lofty repute, securing the Royal London series with a match left.

Despite a series loss, it was a silver lining for the young Curtis Campher who made his ODI debut in the three-match series. Campher entered the record books by becoming the first player in the history of Men’s ODI cricket to score 50+ runs and also claim at least one wicket in both of the first two matches. He is overall the 2nd player to achieve this in ODI cricket as Lynne Thomas recorded this feat back in 1973 while representing England Women.

Curtis Campher also became the first player in ODI history to score fifties in both of the first two matches while batting at No.7 or a lower position. David Hussey was the closest player to this feat as he scored a fifty on debut at No.6 and followed with another fifty in his 2nd ODI batting at No.7.

After a comprehensive win in the series opener, the Three Lions continued their momentum as they wrapped up the second encounter with a 4 wickets win and in the process sealed a series win as well.

The third and the final rubber of England vs Ireland ODI series 2020 will be played on August 4, at Old Trafford and Ireland will be keen to return with some points with the series being a part of the World Cup Super League.