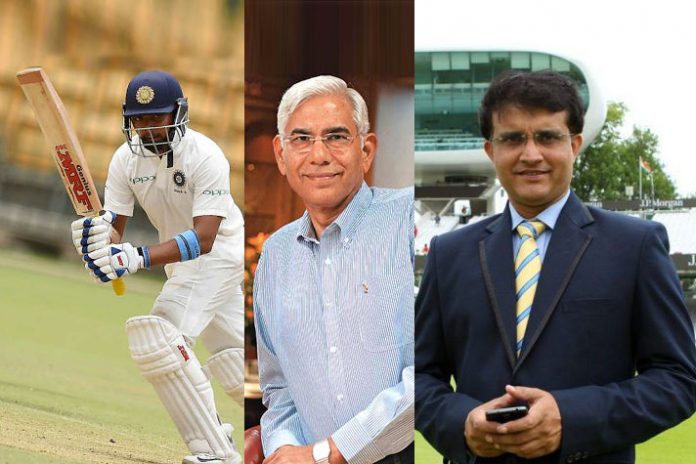 Prithvi Shaw, still 36 days shy of shedding his teens, walks into the men’s world with a brilliant 98-ball hundred on his Test debut. At the Saurashtra Cricket Association Stadium in Rajkot on Thursday there were few to celebrate the knock that offered a lot to celebrate about. When this Mumbai teen was scripting a great note for Test cricket, the empty stands spelt a doom for the conventional format of gentlemen’s game.

This is an irony that when the live cricket action was amongst the best phases for entertainment the people in the corridors of power to run the sport in India were busy sparring over complimentary tickets. Amidst a tug of war between the Committee of Administrators in the Board of Control for Cricket in India and the State cricket associations to host the India-West Indies series games, SCA Stadium in Rajkot is presenting the sad picture of abject apathy towards Test cricket.

The stands on Day One of the Test series are empty and reportedly only 10% of the match tickets are sold. When Test cricket warrants serious concerns to be addressed, there was news of the second one-day international being moved out from Indore to Visakhapatnam due to COA and host body Madhya Pradesh Cricket Association’s dispute over complimentary tickets.

CAB president Sourav Ganguly has told Indian Express that the CAB “will have to give the complimentary tickets” that it has been giving in the past, and the CAB “cannot compromise” on that. The Tamil Nadu Cricket Association too has warned that its executive body would rubber-stamp the decision during its meeting on Thursday. Chennai is scheduled to host the third T20 International on November 11.

The Assam Cricket Association, hosts for the first ODI on October 21, too, have expressed similar concerns.

CoA Vinod Rai with his tough stance has ruled out any possibility of a compromise. The BCCI instead of an amicable solution is finding it more convenient to look out of alternate host associations. The unwarranted precedent is already set by shifting the Indore match to Vizag.

“Our hands are tied by the Supreme Court order. This is not our creation. When the opportunity was there to discuss this, first with the Lodha Committee and then before the Supreme Court, they (state associations) didn’t (raise the matter). Even now the clarifications (BCCI acting secretary) Amitabh Choudhary and TNCA have asked for (with regard to the certain clauses in the new constitution) don’t include this thing,” CoA head Vinod Rai told The Indian Express.

“The games have to go on. We can’t cut a sorry figure. If some associations decide not to cooperate, we will have to look at alternatives. Back-up venues are there. If they (MPCA) had spoken to the CEO (regarding the Indore match), he would have provided them with the solution. We are always open to discussion. There should be a willingness to work out the solution.”

Cricket will continue to be the biggest victim of prevailing uncertainty and differences between the administrators. Months of planning ensures the commercial success of major sporting events like an international cricket match in India. Not just the match preparations will take a hit, but the confusion among the fans and sponsors will also affect the match revenues. The broadcasters too face challenges with their logistics.

Why is this issue coming up at the 11th hour. Shouldn’t the BCCI have been professional enough to sign a match hosting agreement with the State Associations clearly defining the grey areas like a cap on the number of complimentary tickets? Shouldn’t the accountability be fixed?

In a scenario when personal matters take precedence over genuine concerns, cricket will continue to be the victims of administrator’s apathy. Prithvi Shaws will be made to continue to exhibit their extra ordinary craft with no one to celebrate the glorious moments that add excitement to cricket.

On the day the second ODI between India and West Indies was officially shifted from Indore to Vizag, various other state associations stuck to their guns regarding distribution of complimentary tickets. The Committee of Administrators (CoA), on the other hand, expressed helplessness in the matter and said they can’t tweak the Supreme Court order with regard to the number of complimentary tickets a host association can avail of – 10 per cent of the total seating capacity of the stadium – while staging an international fixture. It has resulted in a virtual impasse between the Board and its member associations regarding hosting of international matches.

Accordingly, the CoA has kept a back-up venue for every centre which is scheduled to host the India-West Indies matches.

It could be difficult to relocate matches over the tickets issue, as was done in the case of the Indore fixture. It is learnt that state associations had a conference call on the issue on Tuesday and decided to stick to their customary complimentary tickets allocation. According to a source, the Hyderabad Cricket Association, the hosts for the second Test from October 12, is going to write to the CoA elaborating on the practical difficulties of adhering to the new BCCI constitution which says 90 per cent of the total seating capacity of a stadium should be put on public sale. With the first Test of the series starting in Rajkot on Thursday, the distribution of complimentary tickets is threatening to snowball into a big issue.

“We have a meeting of our executive committee tomorrow, but as things stand, the TNCA is committed to life members, patron members etc. We can’t agree to 10 per cent. That’s impossible for us to conduct. We can’t avoid giving tickets to government agencies. We will not compromise on tickets, like Sourav has said. It’s up to the BCCI to decide then (if Chennai will host the game),” a former TNCA office-bearer told this paper.

The Chepauk, at the moment, can accommodate 24,000 fans out which around 8,000 tickets are reserved as complimentary passes. Asked why didn’t the TNCA raise the issue, citing impracticability, when it moved court seeking clarification on certain clauses in the new constitution, the ex-office bearer said: “We focused on more important things. We thought these are practical issues which we can explain to them (CoA). Unfortunately, the CoA doesn’t have any experience of organising a match.”

The Maharashtra Cricket Association, the hosts for the third ODI on October 27, however, is proving to be an exception, as complimentary passes reserved there have always been less than 10 per cent of the total seating capacity.