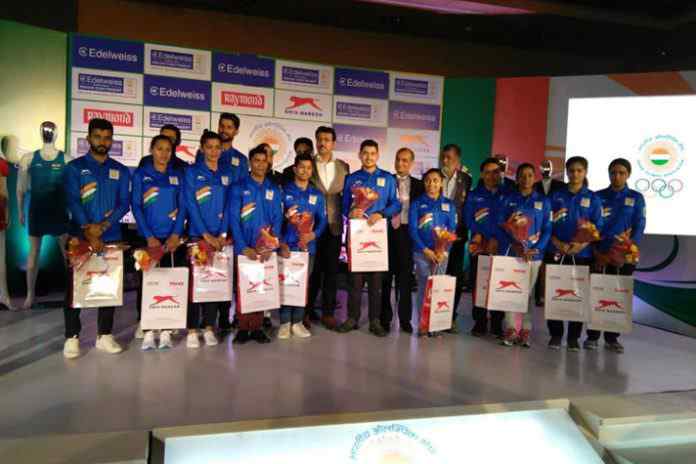 Edelweiss Group will be the principal sponsor of the Indian contingents to the 2018 Commonwealth and Asian Games and the 2020 Olympic Games in Tokyo.

The Edelweiss Tokyo Life insurance has also offered a ₹50 Lakh insurance cover for the Indian athletes representing the country at the 2018 Commonwealth Games at Gold Coast, Queensland, Australia.

The Indian Olympic Association has announced Edelweiss Financial Services Limited as the sponsor of the Indian contingent for the 2018 Gold Coast Commonwealth Games, 2018 Jakarta Palembang Asian Games, and the 2020 Tokyo Olympics.

Edelweiss will also be the official sponsor of the 2018 and 2019 National Games, Indian Olympic Association has revealed at a Press conference in the Capital on Monday.

The IOA has also announced Raymond as the official styling partner of the Indian contingent to the CWG, Asian and Olympic games as well as Sportswear brand Shiv Naresh as sports apparel partner.

Edelweiss Tokyo Life Insurance, the life insurance arm of Edelweiss Group, has offered a life insurance cover of ₹50 lakh for all the athletes representing India at the 2018 Commonwealth Games in Gold Coast. Edelweiss had in 2016 announced a ₹1 crore insurance protection for the Indian athletes at the Rio Olympic Games.

Announcing the partnership, IOA president Dr. Narinder Dhruv Batra said “Edelweiss shared our vision to make India a sporting super power. The Commonwealth Games will set the tone for extremely crucial second half of the Olympic cycle with major tournaments like Asian Games and other Olympic qualifiers. Their (Edelweiss) association comes at a vital juncture for Indian sports.

“It is instrumental to have private sector to come forward and promote Indian sports. I am sure this new partnership will be a boon for our elite athletes preparing for the 2020 Tokyo Games,” added Batra. “IOA is committed to ushering a new era in Indian sports and this association (with Edelweiss) will undoubtedly help create desired results.”

“In order to be on a par with our global peers, India needs a sports ecosystem, one which has both public and private partnerships across education, business, development, jobs, and more. Most importantly an ecosystem that will go a long way in securing our athletes future by offering more specialist jobs and entrepreneurial opportunities, thereby encouraging athletes to be unlimited in their aspirations and confidently come forward and play sports,” added Shah.

“Earlier sponsors were associated only on the basis of select games. But long-term planning and transformation of Olympic governance can only be achieved with long-term partnerships. The new partners are making valuable contributions to the Olympic movement in India,” asserted IOA secretary-general Rajeev Mehta.

Insidesport.co had reported last week that the IOA has inked sponsorship deals with Edelweiss, Raymond, and sportswear brand Shiv Naresh.

Raymond will provide customized, tailor-fitted attire to each of the Indian contingent members at their respective locations. “As Indian athletes raise the bar of excellence in the international sports arena, Raymond is proud to dress them in ensemble that exudes confidence and the true spirit of Indian sportsmanship. With our nationwide network of stores and our ability to turn around the project for the Indian contingent in the location of their preference has been a proud achievement for us,” said Raymond CMD Gautam Hari Singhania.